So the finale was far less dramatic than last week’s episode, but we did have wine! And of course, leave it to our Official Mad Men Grapefriend, Megan.

So first, we see OMMG and her mom drinking some Burgundy. This is what they’ve been drinking all season, and they’re having it as their pre-dinner cocktail which most Americans didn’t do in the 60s. 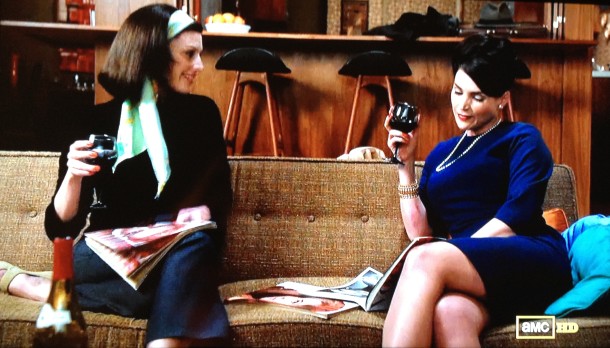 Wine also got a fantastic foreground shot when Mère Megan was on the phone with Roger, who said Don had been complaining that she’d been drinking all of Don’s liquor – hardly! She never touches whiskey, only wine. I doubt Don gave a crap

Later, Megan was post-rejection drunk off of more Burgundy. It’s the same wine, but if it was the same bottle she and her mom had been drinking from she’s probably kind of a lightweight. Don was annoyed with her – though he probably hates her for not being a whiskey drinker, not for being moody and independent. 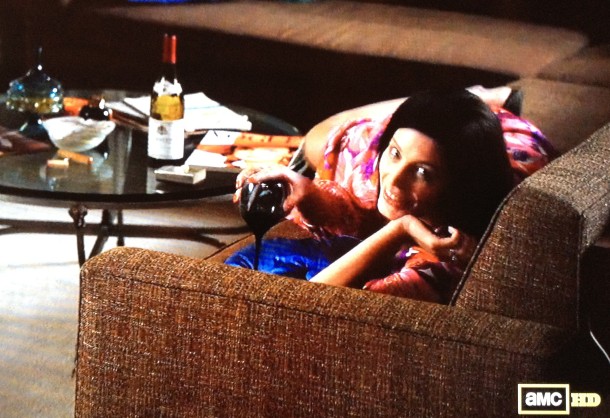 In the final scene at the bar, Don orders his staple Old Fashioned. But how amazing would it have been if he ordered a glass of wine?

Let’s face it – there were far more cocktails downed this season than 22 glasses of wine. But overall wine made a lot of progress with the younger generation (Megan, Jane) and of course the visiting French. So if Don ordered wine, it would be far more creatively symbolic – of his confusion, of optimism, of embracing change, of trying to be closer to Megan – than a toothache! Who knows what will happen next season – depending on when it takes place, Napa could historically fully be on the up and Don might just pour his first pre-dinner glass of grapes.