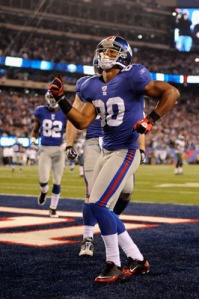 The year is starting off well for the Giants, the NFC East divisional champs after last night’s win over the Cowboys. And many of those wins are thanks to one Victor Cruz, the adorbale, salsa-dancing touchdowner who made a KILLER 74-yard TD last night.

That was after last week’s 99-yard touchdown that set a Giants record for longest pass play and tied an all-time NFL record.

Now, we know Eli likes the Sassicaia, which is 85% Cabernet Sauvignon and 15% Cabernet Franc. But what kind of wine should we give his wide receiver? Well, one person knows – Victor Cruz! Victor Cruz is a winemaker for Cañon del Sol in Columbia Valley, WA. I’ve actually never heard of him or the winery prior to my latest Google session, but what the heck, he’s got the right name!

Winemaker Victor makes a Meritage – here, a blend of Cabernet Sauvignon, Malbec, Cabernet Franc and Merlot – which makes it close to the Sassicaia. But Columbia Valley (Washington State’s largest AVA) is known for its Merlot, so let’s go with that!

Also, Merlot grapes ripen early in the season – just like, oh, a record-breaking rookie! (Cruz is basically a rookie since he didn’t play at all his rookie year.)

And about that salsa dance, Victor said it’s in honor of his grandma. “We used to always get down,” he told Fox News Latino. “Somebody brought it up to me that I should do some of that in the end zone.”

One thought on “you deserve a grape today, victor cruz!”