Last week I was happily drinking at Boulud Sud when who walks in to get his grapes but Victor Garber. I immediately sent a pic to grapefriend Abby, who’s a huge Alias fan. She said there were tons of wine moments on Alias, which he starred in. I never really watched the show, so I’m letting Abby take it away on this Throwback Thursday! Guest post excitement!

First, let me just say how extremely excited I am to be writing my first guest post on grapefriend — and it’s about two of my most favorite things in life: wine and “Alias.” I know everyone is all excited about “Scandal” being the big wine show, but much like numerous plotlines from this season, Alias did it first. Obviously, spoilers ahead!

Don’t get me wrong, I adore Scandal and I especially love you, you giant grapefriend Olivia Pope. But Sydney Bristow was sad-sipping large glasses of red and dealing with traitorous mommy issues before you were an extremely well-heeled glimmer in Shonda Rhimes’ eye. Like Olivia, Syd also had a dad who didn’t do what she thought he did for a living and was actually a pretty badass spy, oft leaving her sitting a table sipping her wine awaiting a man who (in the early seasons) was too emotionally closed off to share a meal with her. Deeply in love with a man she couldn’t be with? Check. When Vaughn was married to that other woman you could find Syd drinking vino and listening to Patsy Cline. Another hot guy who loved her but who she kept in the friend-zone? You may have heard of the actor who played him, one Mr. Bradley Cooper.

I could go on and on with the Alias wine moments but I decided to narrow it down the top three most pivotal scenes that revolved around wine. Also, who knew there were so many Alias fan videos on YouTube? There went hours of my evening…

Midway through season 2, the sexual tension between Sydney and her CIA handler Vaughn (Michael Vartan) had reached an insane “I scream at my TV every week” level. At last they went on a kind of date after a mission which, like most first dates, started off awkwardly until this exchange solved it all:

“I think wine would help the situation.” –Sydney

“I was just thinking the same thing.” –Vaughn

They drank too much and were going to have to stay overnight at the inn attached to the restaurant until bad guys rushed the restaurant and tried to kill them. You know, normal relationship stuff.

The battle for biggest “Alias” grapefriend is a tight race between Julian Sark and Arvin Sloane, two of the extremely cultured but bad men Sydney is constantly trying to take down. In this scene, Sark dupes the CIA and when asked why such an elaborate ruse, he has a perfect grapefriendy answer.

But really, I think the show’s big bad Arvin Sloane is the biggest grapefriend of all. He’s the only character with his very own wine cellar at his house after all. Just check him out in this scene where he tries to woo Sark into a partnership with a bottle of Sark’s favorite wine, a 1982 Chateau Petrus. I defer to grapefriend on whether or not he’s got good sipping technique.

grapefriend note: Pretty good! He swirls first (though on the table, not expertly in the air), then sniffs, then sips and even aerates it in his mouth. Near-sommelier level, I’d say.

Oh and just to show you what kind of insane Alias fan I truly am, I give you my 35th birthday present from my sister a few years ago. Yes, that’s a piñata of Arvin Sloane and page 47 of the Rambaldi manuscript. And of course I’d been drinking copious amounts of wine by the time this photo was taken. 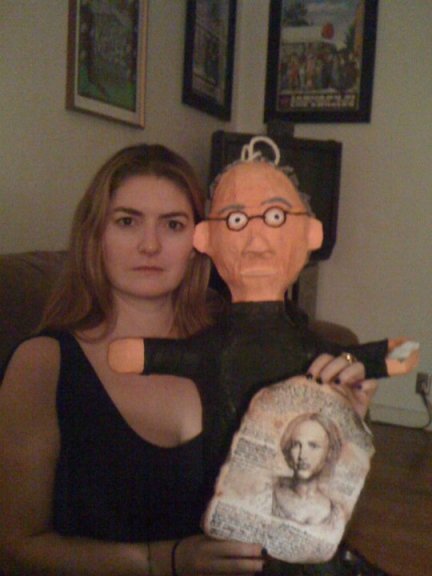