What a difference a two months and one arrest make. Yesterday Reese and Jim Toth were spotted having lunch at the Soho House. 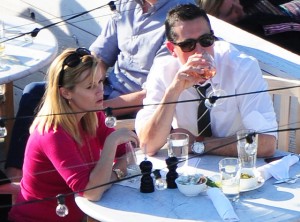 While Jim is going for the grape, Reese looks like she’s very politically drinking water. But remember her birthday in Cabo in March? 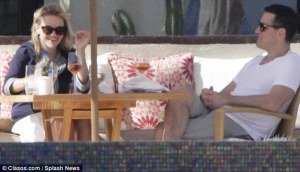 Ah, but that was all pre “Do you know my name???” Anyway, since Jim is still a grapefriend, let’s see what he might be drinking based on Soho House’s (all French, yawn) rosé offerings:

Whispering Angel, Cotes de Provence, France 2011, $14 – this is an extremely pale and extremely dry rosé. Provence rosé’s aren’t my first choice, and looks like they aren’t Jim’s either.

Domaine Crochet, Sancerre, France 2011, $17 – this is made from Pinot Noir. Sancerre rosé usually have some light red berry fruitiness and some minerality to them. This is a possibility, but let’s discuss the third rosé they have by the glass.

Domaine du Cagueloup, Bandol, France, 2011 $19 – yumballs and bingo. Bandol’s mostly known for their rustic, leathery, and cool Mourvedre-based red blends, and this rosé is a mix of Grenache, Cinsault, Mourvèdre, and Carignan. If he wasn’t drinking this one, he should’ve been.