Only one more week til the Winter Finale – so drink up this penultimate weekly wine recap, grapefriends, and take it away, Gabby – haha, Abby!

Was everyone too busy doing actual work to drink a lot of wine in this episode? Apparently. But I’d say it weakened Olivia as she couldn’t see through the Scandal version of John Hinckley and his shooting of the Scandal version of Ronald Reagan and got out-Poped by David Rosen. I say it’s because she needed more wine. Sidebar: The Scandal version of Nancy Reagan, Bitsy Cooper, might be the best thing that’s happened to this show since, well, wine. But more on that later…

If there’s only going to be one grapey moment in an episode, then it’s gotta pack a punch. And oh, how this one did! As Grapefriend noted on Twitter last night, Liv served up her ultimate dis to Fitz: DENYING HIM WINE! That’s right, the President of the United States/her ex-boyfriend/there’s hope that he might be her boyfriend again asked for a glass and Liv was all, “No, you’re not staying.” Fitz, you know she’s not about to waste that “not cheap, but not snobby” vino.

grapefriend wine recommendation: Oh man, this was like my favorite scene ever. If you’re a jerk – no wine for you! I wish the real world worked that way. So for this moment, she should be drinking something totally insane like some sick vintage of Romanée-Conti La Tâche to get him even more bummed he’s not getting any grapes. 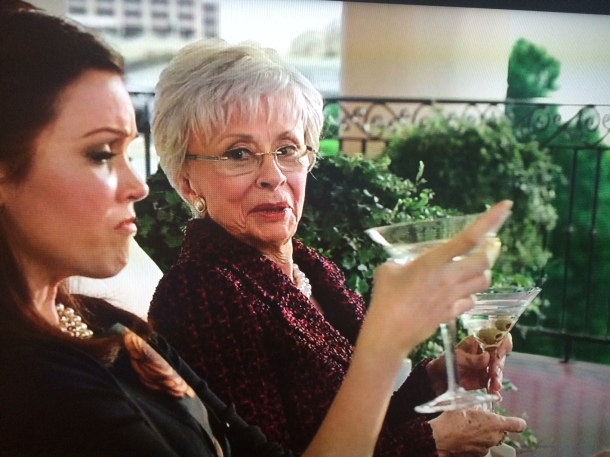 And now I must give a shout-out to my new favorite character: Bitsy Cooper. My only problems so far with Bitsy is that she drinks martinis instead of wine and pledged Tri Delt instead of Pi Phi back in her days in Tuscaloosa. But she’s a total ballbuster, carries joints in her handbag, was a shadow president during her husband’s term, and gave Mellie her mojo back. I live for this tough broad! Shonda, write her a spinoff, stat!

What can we serve her to bring her over to the side of the grape?

grapefriend wine recommendation: The absolute perfect grape for this badass lady is an off-dry Riesling. Bitsy is all sweet on the outside, baller acid on the inside – Riesling has that same exact mix.

Let’s hope for more wine next week! Maybe now that Quinn has searched every locker in D.C. she can go stock up on wine for Liv (who’s apparently the target of this unknown conspiracy). Until then, grapefriends!

Thanks, Abby! We usually end our wine recaps here, but grapefriend needs to weigh in on another type of scandal:

I was sent the link to this week’s NY Times article about Scandal and wine by many people (including wine industry people who jokingly claimed the Times was biting my scene – love it). Yes, I read the article and yes, had so many issues with it.

1) “She never swirls and sniffs, the ritual that non-wine drinkers alternately find amusing, affected or annoying.” FYI, even wine drinkers find that annoying and 99% of them NEVER DO THAT.

2) “White wine is for wimps, with the exception of Carrie [Mathison]. But then Carrie has swagger by definition.” So they’re implying Olivia Pope doesn’t have swagger by definition? Sorry, did they see her walk to the assassin’s cell last night? They probably didn’t since doesn’t sound like they regularly watch the show.

3) “In ‘Scandal,’ with one exception, men don’t drink wine.” Um, her dad is a huge grapefriend on the show, yes, but an entire season was practically based on Liv and Cyrus drinking Bordeaux together. That’s two guys. Guess NY Times fact checkers were on vacation, and probably not in Zanzibar.

4) And finally: “As much as a small group of wine lovers would like to believe wine has gone mainstream, in fact its portrayal on television as a character prop suggests that many Americans still view it as somehow effete, foreign or, at least, no different than any other alcoholic beverage.” Pretty much only wine snobs view it that way. Everyone else is home drinking Barefoot Moscato, Apothic Red, and Gallo, and enjoying themselves. I’m not going to pretend I drink those labels, but I know that’s what most Americans are drinking and certainly don’t put them down for not being able to afford opening $100 bottles (or more) every night of the week. In addition, some people drink Moscato because that’s just what they like. To each their own.

The point of wine on Scandal is that Olivia goes for wine to wind down from her day but she isn’t a ritualistic snob about it, unlike her dad – she even said so last week. She wouldn’t give a crap if she or anyone else grabbed a glass by the goblet or the stem, and certainly doesn’t have enough time in between all of her crises to swirl and sniff.

Most people simply drink to have fun, they drink because they just like the taste, they drink it with popcorn to show their love for a soapy program they watch to escape. They drink like this – try it some time:

2 thoughts on “scandal wine recap: no wine for sucky boyfriends!”