graping it up with...

No one would argue that the Real Housewives shows are some of the grapiest on TV. And on the New York version, Ramona even has her name on her own wine and Luann has dated a wine importer. It came to my attention that Kristen Taekman, the newest addition to the cast, was a grapefriend but really only drank Sauvignon Blanc. Clearly, grapefriend needed to intervene. 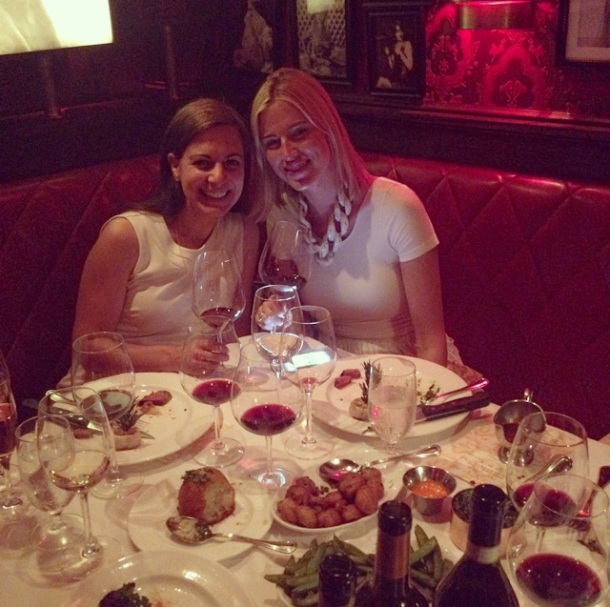 Sauvignon Blanc is great – I like and drink a lot of it. But there’s a world of white wines available to be loved, and hopefully not wasted by throwing in castmates’ faces (see: Berkshires episode, canoe scene).

So Kristen and I went out for dinner with her friend Ilse from the awesome clothing store Wink at Strip House (btw, not a strip joint, as Ilse’s young daughter thought). We started out with a glass of Domaine Carneros sparkling rosé. Huge fan of DC, and rosé bubbly is always a fantastic way to start any meal. Always.

But soon we were on to our flight of three whites: Framingham Sauvignon Blanc from New Zealand, Laurent Girard Sancerre from the Loire Valley, and Belle Pente Pinot Gris from Willamette Valley, Oregon. All were very good with the grilled sea scallop and edamame in corn broth.

The Framingham had the typical cantaloupe and tropical fruit from New Zealand – big fruit flavor that Kristen said was much more fragrant than the others. The Sancerre was much drier and had a touch of flinty mineral. Kristen didn’t mind it, but the more neutral flavor wasn’t blowing her away. The Pinot Gris was sort of interesting, since most Pinot Gris from Oregon is really lush yellow apple and pear – this one was much leaner, way more like the ones from Alsace.

Kristen’s fave: Framingham. Her go-to wine is Kim Crawford Sauvignon Blanc, which she buys by the caseload, and this is very similar. She decisively drank that one for the rest of the course, but was totally open-minded about the others. I told her that her next sampling so should be Albariño, and then for a grassier play try a Gruner Veltliner.

Castmate comparisons:
New Zealand Sauvignon Blanc: Heather. “She’s my best friend out of all the women, and this was by far my favorite.”
Sancerre: Carole. “This wine was sort of neutral, and Carole never likes to get involved in any drama.”
Pinot Gris: Ramona. She makes a Pinot Grigio (same grape, just made in a different style), so this was a no-brainer.

So now the tough work was ahead. Not only does Kristen drink Sauv Blanc most of the time, she almost never drinks red. A lot of people tell me red wine gives them headaches and makes them more hungover. Both are scientifically possible, but honestly you’re missing out on some of the world’s most mind blowing wine!!! Since we were at a steak house, we had to have a flight of reds: Palagetto “Sottobosco” Sangiovese 2008 from Tuscany, Marques de Murrieta Reserva 2008, a Tempranillo blend from Rioja, and a Bricco Garitta, Cascina Garitina, Barbera d’Asti 2012 from Piedmont. 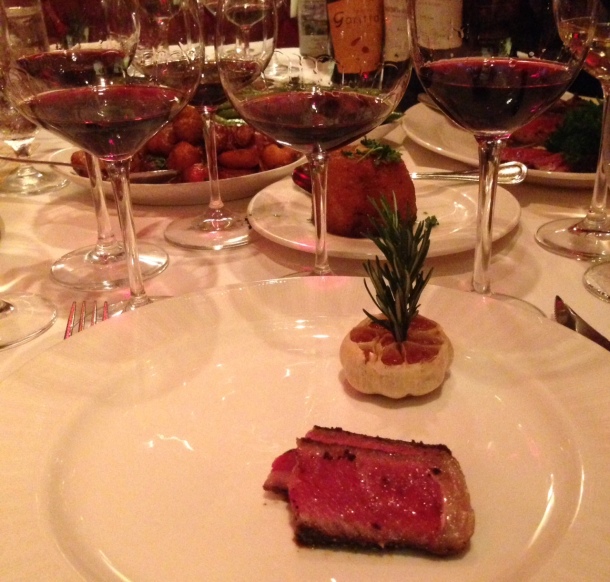 The Barbera was the lightest – smooth and lots of cherry. The Rioja was a bit leathery with darker cherry. And the Super Tuscan was the best with the steak – heavy, but smooth tannins with rich and complex blackberry and dark cocoa.

Kristen’s fave: the Barbera. With white wine loyalists, I always think it’s good to start them off with a lighter red. She liked the other two, but didn’t love the “bite” on the finish (which could be alcohol or acid). I told her to try some Pinot Noirs from Willamette next to see what she thinks. I bet she’d also love light reds like Trousseau from the Jura, but that’s getting wine geeky.

Castmate comparisons:
Barbera: Luann. “Out of the reds, this was my favorite and I love Luann.”
Rioja: Sonja. “Sort of spicy, pretty good.”
Sangiovese: Aviva. “When I tasted it, fumes felt like they were coming out of my nose.” I think you get the idea here.

At this point most of the all-dude tables at Strip House were looking at our multiple wine glasses in awe (it was either that or they were just gawking at how pretty Kristen is, which could totally have been the case). We’d made a ton of progress with the non-Sauvignon Blanc wines, and if that wasn’t enough they then brought out a flight of Rivesaltes. These are Vin Doux Naturels, dessert wines from the Languedoc region in southern France. I love them, but Kristen thought they were sort of syrupy so they brought out a small glass of Peller Riesling ice wine – bingo. Never seen anyone try ice wine and not fall in love. She said she wanted to get a bottle to bring to dinner parties.

So this was the aftermath: 3 girls, 31 glasses. Not bad at all. I could totally be a Housewife.

3 thoughts on “graping it up with…real housewives’ kristen taekman”