Oscar noms came out today, and everyone’s all talking about who swept, who got snubbed, and all manner of other blah blah blah. But the thing that got me psyched was that Pharrell Williams’ “Happy” from Despicable Me 2 was nominated as Best Original Song!!! Seriously listen to it almost every day. I also love “Fun, Fun, Fun” (another Pharrell song on the soundtrack) but “Happy” is amaaaazing and so is the 24-hour video they did for it. I even did “24 Hours of Happy – with Wine” on Twitter where I posted a photo every hour of the wine moments that made me smile the most last year. 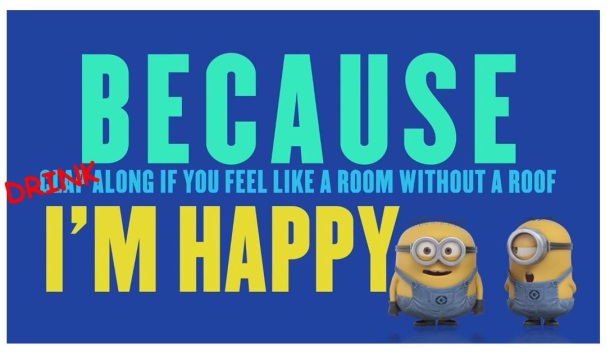 So I started thinking about what grape’s been making happy lately, and I thought about Carmenère. It’s a lighter-side red, but still has some licorice/pepper spice and grit to it. Not only does it remind me of my very happy trip to Chile, but I just read that someone called its re-emergence “a happy accident.” (I mean, the coincidences abound.) In the early 1990s, winemakers figured out via DNA profiling that many of the vines they thought were growing Merlot were actually growing Carmenère.

I detailed a few of my faves while I was in Chile – Viña Ventisquero‘s Vertice and Root:1, Terra Noble‘s CA1 and CA2. But I also like Inama, Purple Angel and Lapostolle. Drink up and get happy!!!

3 thoughts on “drink along if you feel like a room without a roof!”