Most winemakers try to figure out what’s the best kind of grape to grow in each particular vineyard. Terra Noble in Casablanca was telling us that’s what they’ve taken pains to do, taking into account the climate, soil, slope and everything else that goes into the concept of terroir. “Everything in its right place,” they said.

I was totally weirded out because the night before I was trying to fall asleep in my hotel in Santiago and Vanilla Sky was on TV. I think it’s sort of a lame movie but there are certain scenes and lines that I think are brilliant, one of which is the opening scene where Tom Cruise is being all lonely in his cold and modern apartment as Radiohead’s “everything in it’s right place” plays. I love that sing and never hear it without thinking of that scene, so totally bizarre coincidence that only a few hours later someone was saying that exact phrase. 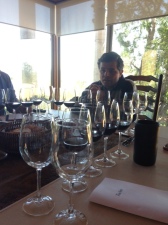 Anyway, we tried a lot of their wines but especially interesting was the comparison of two of their Carmeneres: CA1 and CA2. One’s from the Andes region and one’s from the Coast, so it was cool to try them side by side to see how the two regions affect the same grape. Andes is more lush with softer tannins. Coast had much more grip, blackberry flavor and some dark chocolate on the finish – I thought this one had more character but because it was more tannic needed some meat accompaniment.

I had nothing to fear in that department: after the tasting we had an amaaaaazing lunch with the Carmenere and the most incredible roasted lamb (from Patagonia) that I’ve ever eaten.

Everything in it’s right place. Namely, me at this table for another stunning vineyard lunch.

2 thoughts on “a radiohead kind of vineyard”