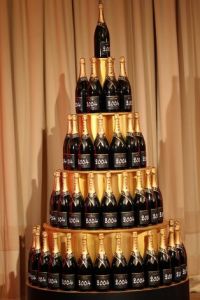 A lot is happening around the Golden Globes, Tina Fey, and wine!

First, we just got this Food Network video where Tina and the other 30 Rock writers drink a lot of wine to celebrate the end of the show. Maybe they’re eating later on but in the video we just see them drinking a lot of wine. Writers + wine = I want to be there. As usual though, grapefriend gets the shaft in terms of actually seeing what wine they’re drinking. Tina’s drinking white wine, and even though Liz Lemon loves her Pinot Grigio I’m going to assume Tina is more of a grapefriend than that. Let’s just pretend it’s a crisp Kerner from Alto Adige.

Second, Tina and her Globes co-host Amy Poehler came up with a drinking game to play during the notoriously boozy awards show:

The other rules were non-drinking related so I’m ignoring them, but I think these three will get you wasted anyway.

Third, we got the menu for the dinner. They don’t give wine pairings since Moët is the sponsor – and the chefs crafted a menu that will pair with 2004 Grand Vintage Moët et Chandon (it’s about $70, in case you were wondering). Let’s take a look: 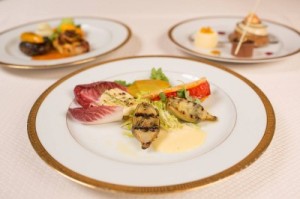 wine: I think Champagne is great to drink throughout the whole meal, but especially with this course. Artichokes are notoriously one of the hardest foods to pair with wine since they have an organic acid called cynarin that makes wine taste a little sweet afterwards. But basically there’s such a hodgepodge of stuff happening in this course that I’d just throw in the towel and drink the bubbly.

wine: Yep, you read that right: Hollywood’s most glamorous will be served Surf & Turf. Did the Beverly Hilton just move to the Poconos? I wouldn’t drink anything but red with a steak, but that would be horrible with sea bass. Yet again, your best bet would be the Moët.

wine: A ruby port will do you right with chocolate; tawny in a pinch. But Champagne won’t suck either.

Moët has been the Globes sponsor for 21 years, but this is the third year they’re doing a really cool program I just learned about. While nominees are on the red carpet, they can raise a toast and Moët will give a $1,000 donation in the nominee’s name to the charity of their choice. That’s really nice. Cheers, Globers, and enjoy the show on Sunday!

One thought on “golden globes guzzling”