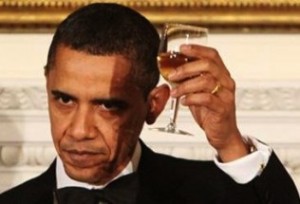 come on, this guy's a grapefriend

After 8 years of non-drinking Bush, Obama rang in Election Night with a Graham Beck sparkling wine from South Africa. Things were looking good for the grape again in the USA and in the White House where all wines served at state dinners are always American. They’re chosen by a small staff based on menu compatibility and with the visiting guests in mind, and I always liked seeing what they poured out.

But now the White House has decided not to disclose what they’re serving anymore! Some speculation has been that it looks gauche to be popping open expensive bottles of wine when the economy still isn’t doing so great. At last year’s state dinner for Chinese President Hu Jintao, they served 2005 Quilceda Creek Cabernet Sauvignon Columbia Valley from Washington state, which goes for about $400 (though the winery says they charged closer to $115). Anyway, POTUS got all this flack for it.

Grapefriend says, “Please, fool!” First of all, these people flew a long way so the least the White House can do is pour them a great glass of wine. Secondly, it’s an awesome way to showcase American wines. And in conclusion, may I please remind you it does not say R.S.V.P. on the Statue of Liberty? OK that last point is just a line from Clueless and doesn’t make any sense here, but you know Lady Libs would rock a good glass.

It’s funny because I was talking to someone from Dr. Konstantin Frank winery (it’s great and in the Finger Lakes) the other day and I thought they said they served all the wines at the Merkel dinner, but this was before I read this non-disclosure news and now I can’t be sure. Still, grapefriend doesn’t like news like this to break in an election year. My vote goes to giving American grapes the platform they deserve.

3 thoughts on “what wine are they serving in the white house? who knows now!”