I recently went on an expedition for Bordeaux Wines to see how you could navigate wine store shelves to pick some great Bordeaux bottles for all different tastes. With over 40 appellations, Bordeaux can be a confusing wine region but it’s totally worth exploring to find the incredibly complex and extraordinarily delicious wines.

Bordeaux wines are all about the blend (as opposed to Burgundy which is usually all Pinot Noir for red wines and all Chardonnay for whites). Both their whites and reds blend a few key grapes – for whites, they take the acidic Sauvignon Blanc and match it with the fleshier Semillon. White grapes make up only 11% of the vineyards in Bordeaux so they don’t get as much attention as the reds, but they’re actually excellent spring wines and you can easily find them for under $20.

I headed to Beacon Wines & Spirits, a great basic neighborhood wine store with a vast selection that makes it easy to find almost anything you’re looking for. They had a ton of white Bordeaux so I honed in on the ones from Graves – the gravelly soil that gives the region its name produces some of my favorite mineral-driven whites. I chose a 2013 Chateau Haut Selve, a blend of 60% Sauvignon Blanc, 30% Sémillon, and 10% Sauvignon Gris.

The Sauvignon Blanc gave it an apple tanginess and a good dash of acidity that made my mouth water, while the Semillon added white floral notes and a subtle, fleshy texture. It almost tasted like you squirted a ripe lemon over a ripe yellow apple. Refreshing with both a creaminess and some acid, this would be great with a summery avocado salad with a lime vinaigrette.

On to the reds! Bordeaux reds blend five main grapes: Cabernet Sauvignon, Merlot, Cabernet Franc, Petit Verdot and Malbec. The two most prevalent and important are Cabernet Sauvignon which adds structure and blackberry fruit and thrives in the gravelly soil of the Left Bank, and Merlot which adds velvety texture as well as plum and blueberry notes and dominates in the limestone soil on the Right Bank. 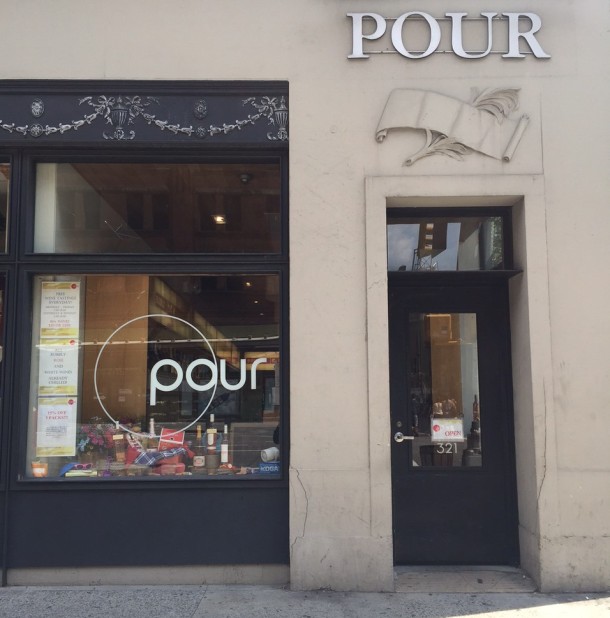 Pour is a boutique wine store on Amsterdam Avenue that sells small-production wines costing about $50 max. Their wines are meant to be drunk now, not aged, which is pretty helpful considering that most people buy wine they’re going to drink soon (especially in New York, where most people barely have room to store wine!). Their wines are shelved by sections like “Bright” and “Bold” rather than by region, but their super descriptive cards clearly state the wine’s region if that’s what you’re specifically looking for.

They only had a few Bordeaux to choose from – a store with well-selected bottles can really help you concentrate on taste details rather than an enormous quantity of bottle after bottle. I chose the 2009 Chateau Siaurac from the Right Bank’s Lalande de Pomerol – an area near pricey Pomerol where you can find good values (this one was $30). With 85% Merlot and 15% Cabernet Sauvignon, I thought the softness of the Merlot would be better for a bottle that was still pretty young by Bordeaux standards.

The Siaurac was packed with just-underripe wild blueberry and black plum, with a slight hint of mint and black olive. Being a little young, it still had some grippy tannins that would hold up against steak and grilled portobello mushrooms.

For my last stop, I headed to Acker Merrall which is probably my favorite wine store on the Upper West Side. It’s medium-sized so it has a large range of bottles but isn’t overwhelming. Plus, the staff is super knowledgeable and very helpful.

Since I already had one bottle from the Right Bank, I chose my third bottle from the Cabernet-heavy Left Bank – Saint-Estèphe to be exact. The 2011 Château Haut-Beauséjour had 60% Merlot and 40% Cabernet – not quite dominantly Cabernet but a good dose more than the Right Bank one. That said, Haut-Beauséjour still uses more Merlot in the blend compared to other chateaux on the Left Bank, which makes it easier to drink at a younger age. This one was much smoother with rounder tannins and lush fruit – lots of plum and ripe blueberry with swirls of violets. Despite the fact that this one had less Merlot, it ages the wine in 40% new Frenck oak (the Siaurac uses about 20%) so it felt softer and rounder. A good, very drinkable-now value at $30. 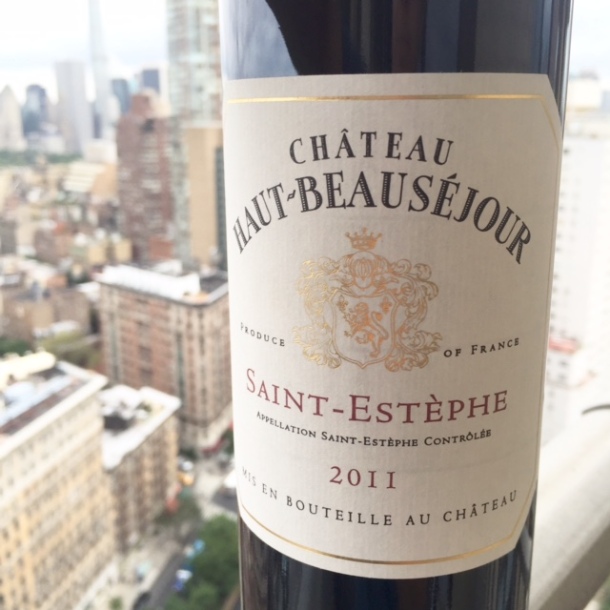 After initially thinking that shopping for Bordeaux might be confusing, I felt great about all three bottles. As with any wine region or grapes, once you drink around and figure out what grapes and regions are more your thing is it’s pretty easy to land on a bottle you’ll like! Check out everyone else’s #BDXinmycity picks here.