Abby is away and this is what happens when I don’t have my plot recapper.

It was very exciting because we got a wine moment right at the open! Papa Pope was at Olivia’s place and pouring out what’s certainly better than her go-to California Oak. 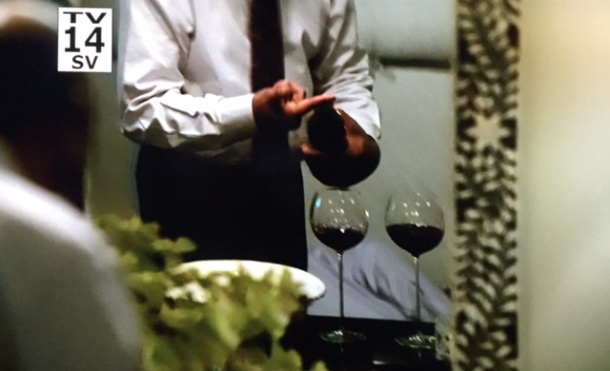 A lot of berating and threatening happens for way too long frankly, but basically he wants her to be his fixer to combat B-16 which I still don’t really know what it is. I think a lot of people don’t know either. It’s really just like a plot driver/overlooming threat/MacGuffin. But then the MacGuffin sometimes comes into play when it turns out Fitz is a bad person that makes Liv shake and cry in elevators.

Back to our favorite plot part, we get confirmation on how good the wine is when Papa Pope finishes his threatening and takes a sip of the wine before he leaves. “Excellent as always,” he says, although does NOT finish the glass which is probably the most telling sign of an evil character.

so much wine left in that glass – shame, shame

grapefriend wine recommendation: I’m torn – if you’re going to try to convince someone to do something you want to pour out something really good. But maybe not too good, because then they’d just know that you’re there to just basically throw down veiled threats. But especially if you’re not even going to finish your glass, then you should just go with something good but not like Grand Cru. Beaucastel Chateauneuf du Pape is great and around $100 – should do the trick. As long as you finish your glass.

Things were getting hairy with all the reading of the bill, while some other embroilment was happening with Liv’s client who was having an affair with some politician’s wife. That’s my take on the plot. So cut to Liv in her usual turmoil, back at home pouring out her usual California Oak which got some pretty prominent label showing.

This scene blew up grapefriend traffic. Seriously, here were the search terms that drove traffic to grapefriend: 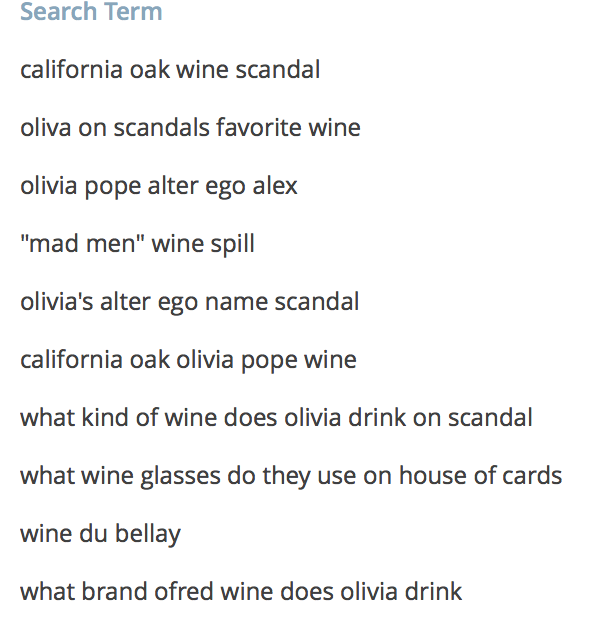 Yep, people really want to know what wine she’s drinking. But as all grapefriend readers know, Olivia drinks fake wine. Which leads us to…

grapefriend wine recommendation: It’s spring, and I’m currently obsessed with reds from the Jura region in France. The grapes are trousseau and Ploussard, and they’re light and have a little funk to them. Drink with a little chill and you have your perfect winter – summer transition wine! Looove them. 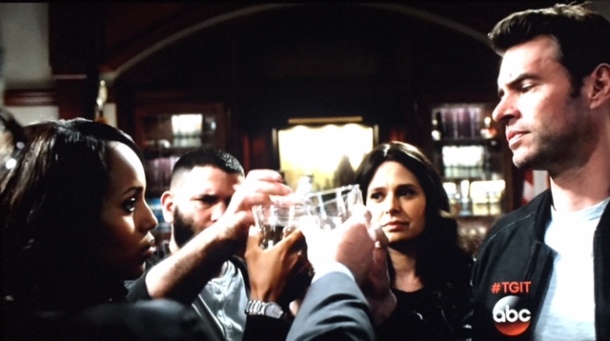 We end the episode with a whiskey moment. They’re not “celebrating but drinking to” wearing white hats. This was before the Big Shocker Scene at the end, but since that scene didn’t include wine grapefriend ain’t gonna lay down any spoilers…

One thought on “scandal wine recap: excellent as always”