The Scandal grapes kept coming in Week 2! Take it away, Abby!

The second episode of the season sees everyone getting back into their normal work routines, especially Liv who (as we’re reminded multiple times) is no longer “standing in the sun” with Jake. She is, however, jogging with him—presumably working off all those giant glasses of red. [grapefriend note: You gotta pay to play – every grapefriend knows this.]

And while wine didn’t drive the plot quite as heavily as it did during the season premiere, we weren’t without some key grapey scenes!

I’m pretty sure more than a few viewers had a “life imitating art” moment with the classic Scandal shot of popcorn and red wine on Liv’s coffee table as she contemplates whether or not to call Jake (who I wished all hour long would stop saying “booty call”). But who of us has not been there after a few glasses? And indeed the call is made, but no booty is had…yet. I’m guessing if Liv had wanted to come over to his newly-rented hotel room, Jake would have dropped his snooping into Harrison’s death, stat.

grapefriend’s wine recommendation: Although it’s now a Scandal classic, I will forever maintain that red wine isn’t the best thing to drink with popcorn. A rich white would be best, like Chardonnay. Don’t poopoo it – unoaked ones are great. And since Liv is so down with the French, she’d be drinking a white Burgundy and LOVING it. Alas, she shuns the white wine even more than she’s shunning Fitz this season. 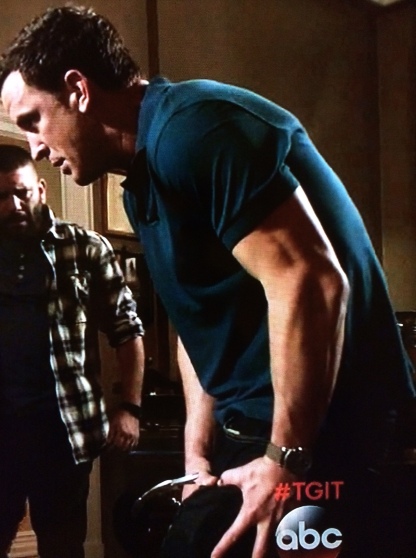 OUCH! Yep, that’s a corkscrew in the leg of former POW James Elliott as put there by his wheelchair-bound wife, Lisa. Wine-related violence is not the sort of thing we like to see here at Grapefriend! Corkscrews should only be used for good, people. We have to agree with Liv here in thinking a divorce might be your best option, Elliots.

grapefriend’s wine recommendation: Wine does not condone acts of violence, and would never be caught in such a scene.

The aforementioned booty call does indeed occur when Liv shows up at Jake’s with the last bottle of that fake wine from the island. She probably went through those other four bottles on her own while sorting out her life now that she’s home in DC and her on-again, off-again boyfriend, POTUS, is mere blocks away.

grapefriend’s wine recommendation: Booty calls require a sexy wine – like a complex, earthy Barolo. That’s made from the Nebbiolo grape which is said to come form the Italian word for fog – very mysterious and very delicious. Also, Shonda Rhimes did confirm that Liv’s wine that’ll change everyone’s life does not, in fact, exist. Booooo:

The ’94 du Bellay. We made this wine up. Same wine Cyrus brings to Liv’s apartment back when he’s sure James is cheating. #scandal #tgit

As with last week, I need to give a special shout-out to FLOTUS. Mellie definitely deserves a grape today for emerging from her cloud of heartbreaking grief and eating her feelings to show up to the State of the Union. I’m sure Grapefriend can offer some suggestions about great wines to pair with that fried chicken. Hang in there, Mel!

grapefriend’s wine recommendation: Well, what do you know – I CAN offer not just a great suggestion for fried chicken but the PERFECT one: Champagne! The bubbles and acid cut right through all of that awesome grease. Rock the high-low and pop a bottle, Mel.

See you next week for the second Scandal wine recap of the season – and follow along on Twitter @grapefriend and @abbygardner, where I wish someone would explain the Macarthur Park song choice from last night.

Sign up to get the scoop on what wines go with each month’s biggest events here or below!

One thought on “scandal wine recap: the du bellay does not exist”