The final season of Mad Men started last night (the first half anyway, since it’s split into two mini-seasons). Roger Sterling, for one, was ready – WITH WINE:

@MadMen_AMC @MadMenSCP What business would that be? Wine, women and song? I’m ready…

Between Scandal, Game of Thrones, and now Mad Men‘s return, there’s never been more wine on TV! Let’s recap: although most people equate Mad Men with liquor (Don and whiskey, Roger and vodka, everyone else with everything else), here at grapefriend we count the number of glasses of wine they drink. The count has been going up every season, pretty much in line with the consumption of wine in the US during the 60s. This last season has kicked off in January 1969, when Napa was just getting established and Americans were starting to get a little more turned on to wine.

Last season, we had a record 23 glasses of wine drunk on the show (the best moments awesomely documented here), mostly led by our resident Grapefriend Megan whose parents are French Canadian and love the grape. Clearly, Whiskey Don and Wine Megan are doomed, just as Wine Olivia Pope and Beer Jake are on Scandal. Matt Weiner loves that symbolism, right?

Unfortunately, last night’s “Time Zones” episode didn’t kick off our count very promisingly. First we had Megan’s OJ Berman-type agent order some “French Champagne” to celebrate her callback for an NBC pilot. Loved it – all Champagne is French, as any good grapefriend knows. If it’s not from the region of Champagne, it’s just sparkling wine. (As a refresher, we don’t count Champagne in our wine count – Champagne is technically wine, but we track the infiltration of still wine in America.)

When the dude leaves, Joan puts a definitive end to this non-alcoholic drinking: 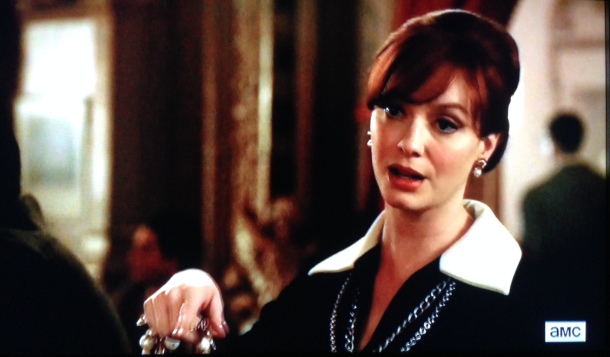 “Can I get a splash of whiskey in this?”

OK, so this last grape-related moment also skirted the issue but actually was pretty monumental. Megan’s in her Ladies of the Canyon home, whipping up dinner amid the howling coyotes when Don gets home. She tells him she’s making coq au vin, which is chicken made with red wine.

Most modern recipes call for a Pinot Noir, though Julia Child’s original recipe from the early 60s recommends “Burgundy, Macon, Chianti, or California Mountain Red wine.” So since Burgundy and Macon (a subappellation of Burgundy) are primarily all Pinot Noir, let’s assume that’s what Megan’s using. We sooort of see this green bottle in between the kitchen divider slats but it looks more like a thin flute, which is the bottle they use in Germany and Alsace for Riesling and Pinot Blanc.

However, in one of the greatest grape moments in Mad Men history, Don asks, “Is there any wine left or did the chicken drink it all?” Yep, that’s right – Don was going to drink wine!!! But then Megan tells him she picked up a bottle of whiskey for him so that’s what he winds up drinking.

And so in true Mad Men style, we are left with so many questions: is Don getting ok with a pre-dinner wine? (I’ve always thought that would be the ultimate symbol of both him and the times truly changing, and don’t think I haven’t dreamed of the final series shot him with a wine glass in his chair instead of a cigarette). Will anyone else switch over to the grape? And will Alan Silver finally learn the difference between Champagne and sparkling wine?

Mad Men season 6 wine count: 1. Sorry, but even though Don didn’t drink the wine, it was on premises and he was going to. And you know Megan did at dinner. So I’m counting it!

One thought on “mad men wine count: can i get some french champagne?”