Went to a great dinner last night with Sandeman port to try the newly-declared 2011 vintage. When a grape-growing year is particularly good, they “declare” it as a vintage year and use only that year’s grapes in the bottle (Champagne does the same thing). We tried the 2011 which was full of fresh red berries, black peppercorn and purple wildflowers. But even cooler, we got to try a few vintage Sandeman ports going all the way back to 1955!

It was AWESOME: deep fig and delicious, smooth yellow curry. When I taste I always like to put my notes down first and then see what they list – you might not actually find all of their notes yourself, but usually it’s a good way to teach you what to potentially look for. Throughout all the vintages, I got a lot of fig, iodine, and curry with the older vintages, and then more cocoa powder, purple flowers, and fresher red berries as we got to the younger ones. (They listed balsamic vinegar, cedar, and resin often for the older vintages – I got one or two hints but much less than the other stuff I listed.) 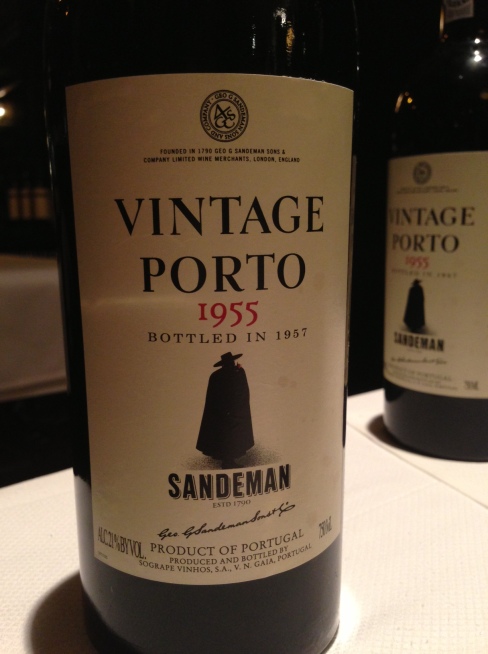 They call these library ports so that’s why they decorated the tables with books (even the menu was printed on a bookmark). It all felt very Harry Potter in a way, which makes complete sense since JK Rowling lived in Oporto, Portugal and got a lot of the inspiration from the stuff in that town. In fact, when I was there last September, someone told me that Lord Voldemort was inspired by the caped dude on the Sandeman label. In Oporto they have lots of billboards with the mysterious caped guy looming over the hills, and more brightly-caped students flood into the streets when they graduate.

George Sandeman was at the dinner and told us that this artist George Massiot Brown was commissioned to create the caped guy in the 1920s for a newspaper ad, and Sandeman then took the visual and used it as their logo.  Pretty cool.

5 thoughts on “vintage port night, and what it has to do with harry potter”