free run juice
Grapefriends are all over rosé, which means it wasn’t going to be long before celebs hopped on the vine. Not only are the drinking it up, they’re making it too!
.

Most people automatically started hating on this because it’s celeb-made, but Miraval sold out in 5 hours. Also, it’s made in conjunction with the Perrin family who makes amazing wine in the Rhone, and this rosé is good! It’s packed with candied watermelon and strawberry flavor, so pretty different from most light Provencal rosés. It’s gotten good reviews across the board, so stop dissing and drink up. $24
. 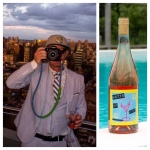 Naomi’s brother is a photographer and now a grapefriend. His just-out rosé is from Rioja but not very ruby like most Spanish rosados. It’s so light you’d swear it was from Provence. No word on whether Naomi drinks it, but coincidentally I did see her and Liev biking with their kids the other day. It was nauseatingly cute despite the fact that they didn’t have wine on hand.  $54 for a 3-pack.
.

I tasted through a few of the Skinnygirl mixers and wines for a magazine. The mojito mixer isn’t bad and neither is the Moscato wine, but I’d pass on the metallic rosé. Also they used to call it “blush” which is just so cheesy and 70s. They changed it to rosé but it left a bad taste in my mouth – figuratively and literally.  $14
. 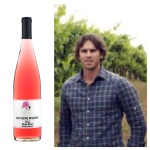 Growing up in Sonoma, he was a winemaker before he was The Bachelor. Ben makes Envolve wine with his high school buddies Danny Fay and Mike Benziger (whose family is a pioneer of killer biodynamic wines). I love Envolve’s rosé made from Syrah and Pinot Meunier. I drank it with the 3 of them and they told me they call it a “porch pounder” because you can just sit on your porch and drink away. I’m in. $27
.

This summer André Balazs made not one but two custom rosés for his hotels and restaurants. For Sunset Beach on Shelter Island, he partnered with Long Island winery Channing Daughters ($75 on the Sunset Beach menu) and he’s also doing one with Chateau Minuty from Provence ($90 on the menu).
.

I’ve only heard about this one, and it seems a little weird only because the article said they’re releasing a 2010 and most rosés are drunk young (ie, you’re going to be buying and drinking mostly 2012 this summer). Also, it was just a story in Life & Style so it’s not like I 100% trust it. Still, Kurt Russell makes wine in Santa Ynez so I could see Kate & Matt getting grapey and making rosé. It’s supposedly called Hudson Bellamy and I even found a design company that supposedly did the label, but who knows.