For the second year in a row (which is only as long as I’ve been keeping track, could be more), Estancia was poured at the WHCD. The Washington Hilton tweeted out this pic:

It looks like Chardonnay and maybe Cab, although the green foil on the red is throwing me because their Cab has a red foil cap:

The green cap could just be a special bottling for the White House though – not sure. Or maybe the light is just weird and it’s the Reserve Meritage. But I also saw this pic on Instagram: 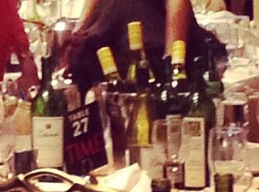 The Estancia Cab is clear (and with black foil now). And now we have Estancia Pinot Grigio in the bucket (the white stripe and screw cap give it away). But now there’s a totally different red on the table at the right. This is definitely not Estancia, and in fact looks like Mount Veeder. It’s too blurry to tell for sure but look at the resemblance:

This is like Watergate proportions of mystery. Will update if I hear anything else.

FYI, all the Estancia wines are under $20 and the Mount Veeder is about $40 (and really good, fyi).

“Things are so tough for old media that — this is a true story — Reuters is having its after-party right here at the Hilton. Nothing says ‘we’rehaving a great year’ like having your after-party at the same table where you just had dinner. With that in mind Reuters is asking everyone to leave a little wine at the bottom of their glass.”