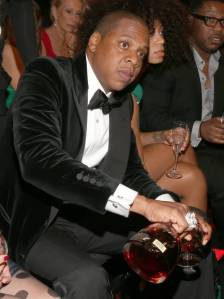 I can’t believe how many people were asking what Jay was drinking last night at the Grammys. I mean, it wasn’t like it was wine! But seriously, that guy can sell anything, and this time he’s selling D’Ussé cognac.

It’s a new cognac that debuted last summer, with Jay-Z’s help. What exactly is Hov’s relationship with the cognac? Unclear, just like his partnership with Ace of Spaces. It’s been debated what, if any, kind of financial stake he has in his promotional deal with the $300-a-bottle champers and I haven’t found any exact details about the D’Ussé one either. He does have it in all his 40/40 clubs though, so I wouldn’t be floored if he’s getting a slice. Plus, no one (especially not Jay-Z) does this backstage at the Grammys without getting a cut: 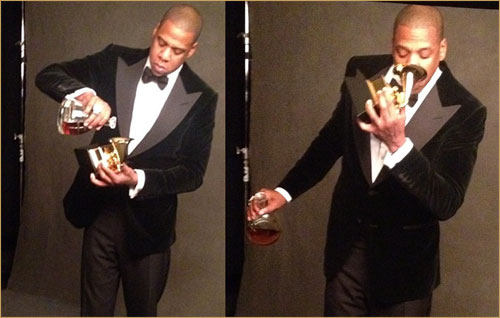 Here are a few basics about cognac:

If you don’t know about D’Ussé consider yourself decidedly not in the target demo since it’s been everywhere – Super Bowl, Art Basel, the Grammys, and this weekend’s upcoming NBA’s All-Star Weekend. Jay and Bey have been making appearances and hosting parties at all these big events to help Bacardi bust into the cognac game:

Here’s a cool commercial for it with Jay, though I’ve never seen it on air:

I’ve always been much more of a port girl and don’t do cognac often (I think I’ve only had Hine and Delamain) so I haven’t tried D’Ussé yet, but here’s how the cellar master describes it: “The first sip shows woody, spicy (cinnamon) tones, a benefit from the ageing in dry cellars. The aftertaste is long, smooth and round, thanks to the ageing taking place in humid conditions.”

Thoughts? Would you buy it? Do you even drink cognac?

6 thoughts on “what was jay-z drinking in his grammy seat?”