Are you kidding me? Jeez, the things you find out about people. Steve Carell is hilarious and makes a ton of coin acting now, but he recently told Parade that he used to be a wine telemarketer!

“Talking people into buying wine on the phone is not an easy job to begin with” he said, “but when you don’t know anything about wine and you really don’t drink it, it becomes even more difficult.”

Hold up – “you really don’t drink it”??? Oh, Steve! You need to hang with grapefriend. He may not drink a lot in real life, but his movies fare a bit better:

This was him in Dinner for Schmucks, rockin’ some bub with Paul Rudd (his glass is full, but whatever!): 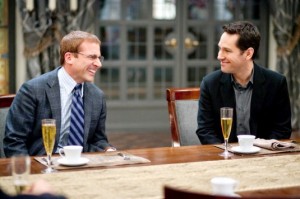 And I couldn’t remember if he drank wine in Date Night, but then my friend pointed out they did. And after doing some quick research, check out all these grape moments:

FYI, there’s a wine called Date Night that did a series of screenings when the movie came out.

Anyway, then Bon Appetit asked Steve, “What’s your drink of choice when you go out?” And he said, “Amstel Light or red wine.”

Aha! Maybe he’s not a fanatic, but a grapefriend is a grapefriend. I’d suggest a light, breezy red for him, like a Gamay (found primarily in Beaujolais). It doesn’t take itself too seriously, and when you drink enough of it you start to laugh.
Advertisement