First of all, this is really delayed because I was on vacation and am just catching up on my Mad Men. So this one’s about the episode where Don and Joan went drinking and the other dude went chanting.

It was getting really treacherous at the end because we were at like the 50-minute mark and there was lots of drinking going on but not a grape in sight. But leave it to Megan to save the day, and she is now the show’s Official Grapefriend! This title has been bestowed upon her for her love of the grape all season, and in this episode for the following reasons:

1) When Don gets home from his whiskey drinking (there’s no less of a grapefriend than Don – could this be a symbolic foreshadowing of their demise?), Megan’s all pissed waiting at the dinner. But she has a glass of wine poured out.

2) On the close and relentless inspection that you’ve come to depend on grapefriend for, it was a Burgundy (no chateau detectable). It’s hard to see, but you can make out the “UNDY.” And she was drinking French with her parents too, so this makes sense.

3) When she gets pissed, she throws the spaghetti against the wall – NOT the wine. Nice.

As an aside, this is the second time she’s cooked plain spaghetti. Lame. But at least she cooked that boeuf bourguignon a few eps ago. And I digress.

4) Lastly, she has poured out a glass for herself, but not for Don who she’s pissed at. Well played, Megan, well played. 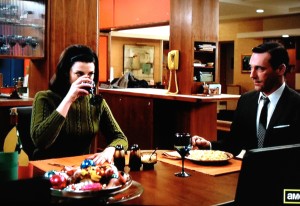 Enjoy your title, Megan, and all the joy it will bring to your life!!!!

2 thoughts on “mad men: the coronation of megan”