Let’s just get straight to it, because things have gotten VERY exciting!

Wine made its first appearance last night at the Draper’s household. No, we haven’t yet converted Don to the grape, but the arrival of Megan’s French parents meant wine was going to be drunk Chez Draper! 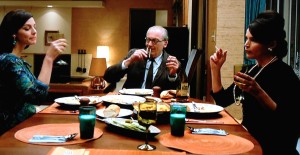 They had white wine, so I’m guessing it was a white Burgundy (Chardonnay) by the sloping shoulders of the bottle. Don wasn’t there yet so his wine glass was empty (as it probably was throughout dinner since he usually just continues with his cocktail) but still, we had three grapefriends in one scene. 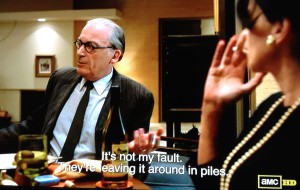 Next up, the Heinz couple returns with their love of the grape with dinner. They go to the Hemisphere Club, which I guess was in the Time Life building in the 60s, and are drinking red wine. Not Don of course! And Ken didn’t have a glass in front of him either, but we still had FOUR people drinking red wine. 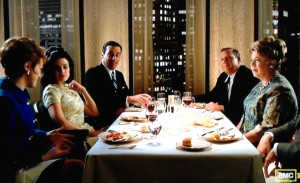 Now, I can’t exactly count what transpired next as part of the tally but it was certainly significant. Don’s in trouble, knowing he’s about to lose the account, and what does he do? Orders “a bottle of Sauternes and six glasses.” 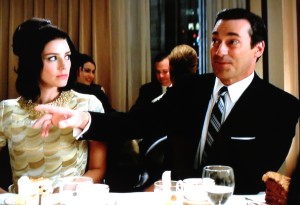 Now I know it was only because he was panicking, but still – he ordered wine, and my absolute favorite dessert wine! And when he wins the client over, the Heinz guy scratches the Sauternes and orders Champagne. We don’t see them drinking it, but it’s implied. We do see the office drinking some Moet the next day, but the Mad Men Wine Tally Official Rules state that we can only include still wine.

Hey, no prob, Official Rules! We’ll just go right to the third scene with wine! When Don gets his award, Megan and her mom both suck down some white grapes. 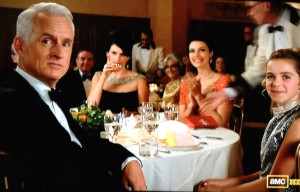 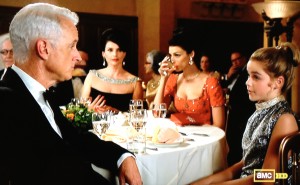