I’m possibly still bored from last night’s Oscars. Way too many filler segments in between just handing out the awards – and even that was drawn out by the end when the presenters had to talk to each nominee individually before just opening the damn envelope. 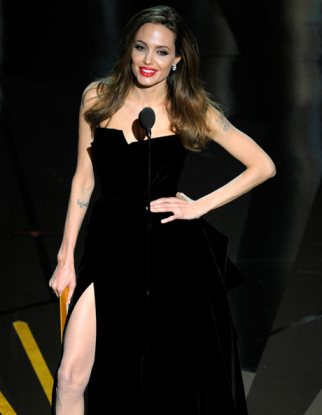 The only thing that made it mildly bearable was people’s observations on Twitter, the best of which weren’t even about the awards. We had a ton of J Lo nipple sightings, love for Captain Von Trapp and general mockery of Angie’s stance in her slit dress as she presented. It makes sense to pose on the carpet where you want to show off your dress. On stage, she just looked absurd.

Legs in wine also tend to create a lot of chatter. After you swirl a glass of wine, legs are those little rivulets that form and fall down the side of your glass. People think it can indicate how good, sweet or thick a wine is, but they only indicate how much alcohol’s in the wine. Alcohol crawls up the glass because it has lower surface tension, but also evaporates faster than the water in the wine because of its lower boiling point. So the greater surface tension of the water causes the wine to pull together into “legs” that run down the side of the glass. OK, science lesson over.

So maybe Angie is just a fan of high-alcohol wines. If not, me and the Descendants screenwriter Jim Rash will continue to mock her. (I want to drink wine with that guy – he’s hilarious, video here.) Towards the end of the night, @AngiesRightLeg had even joined Twitter. It’s only following @JLosNipple, but has way more followers than that other bared body part. So Angie’s leg probably went to the Governor’s Ball and drank some big Napa Cab or Zinfandel, while J Lo’s nipple probably went home and sucked on a bottle.