Welcome back to our final half-season of Mad Men wine recaps! As a show that’s known for prevalent cocktail drinking, grapefriend tracks the few but increasing glasses of wine they knock back. In the 60s, when the show fictionally started out, there wasn’t much wine being consumed in the US – Napa hadn’t really begun growing good grapes and not many people were drinking imported wine. But as the show travels to the 70s, the cast has started getting their grape in more and more – just as Americans were switching from liquor to wine too.

Last night’s episode did NOT disappoint! Let’s get to the fun.

Don was carousing with tons of women, basically back to the old days and where he thrives. He winds up going home and calling another of the girls who called him, she comes over and brings a bottle of red wine – loving this new chick! 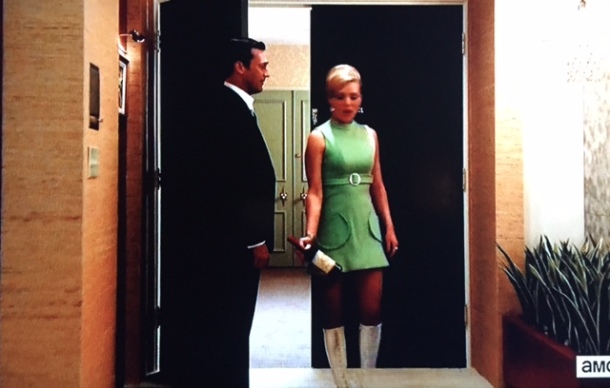 It took Megan forever to get Don to drink wine, but this girl has a glass in his hand before their clothes are even off. 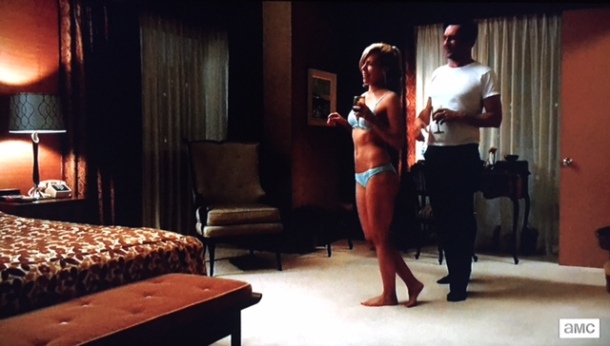 Then a tragedy occurs: our new favorite grapefriend shows her amateur chops by spilling the wine! It got real Scandal up in the house.

But unlike Olivia Pope who stares at the stain and freaks out, Don just throws a blanket over it and commences Sexy Time.

We were already two grapefriends up in the first five minutes! Later, Peggy goes on her date, nattering on so much about the lasagna vs veal thing that we don’t even get to hear about the red wine they’re drinking. She’s SUCH a protege of Don.

You can’t see it in this photo but her date was drinking red wine too, out of an Italian “fiasco” bottle which means it was probably some cheap Chianti. Proving wine leads to such good things, Peggy has the best date ever and they almost go to Paris together on a whim. That’s what wine does, grapefriends! 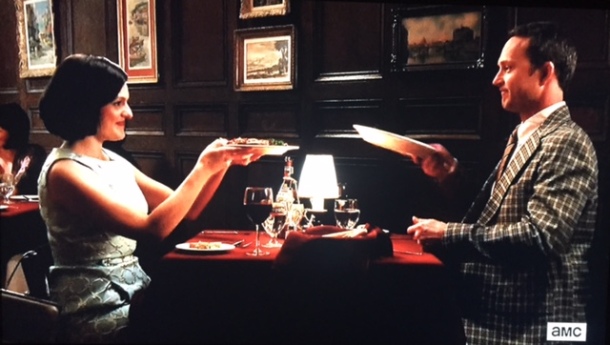 Mad Men season 6 wine count: 11. We already had 7 glasses from the first seven episodes, so this episode’s four glasses are added on to that. The 70s are good and grapey so far, and we have 6 more eps to go!

2 thoughts on “mad men wine recap: the 70s are groovy and grapey”

Leave a Reply to A Famished Foodie Cancel reply