Things continue to be horridly non-grapey on Scandal. I’ll let Abby walk you through the non-wine plot and get back to snoring…

Well, Liv didn’t die at the hands of her kidnappers. I KNOW…HUGE NON-SHOCKER. The most realistic part of this episode was Quinn admitting that she couldn’t get that red wine stain out of the white couch. All Grapefriends know that ish is not easy!

Sadly, nobody thought to hand the lady a glass of wine at any point after her rescue which came at the hands of a season one character we’d pretty much forgotten about. But well done, Desmond from Lost. It was actually pretty great to see you!

Hopefully now that Ms. Pope has returned to DC, this show can get back in the good graces of Grapefriend, because lately it’s been a real problem.

Quinn was freaking out because she thought Liv was dead, so she drank whiskey. I mean, if she really wanted to honor her this was a very poor choice of beverage. No doubt Grapefriend has a better option!

grapefriend wine recommendation: Usually true, but honestly when things get this bad – like 8 degrees in NYC bad – sometimes a girl’s gotta go whiskey. Put some hair on your chest with some peaty Laguvulin, that’s what I’ve been rocking and I bet Quinn and her flannel shirt are all about it too.

Honestly, I think other characters drank the brown stuff too but I’m just too bereft over the lack of celebratory wine to handle it.

This photo of Liv drinking water pretty much sums up how wide the divide between her and all of us Grapefriends. 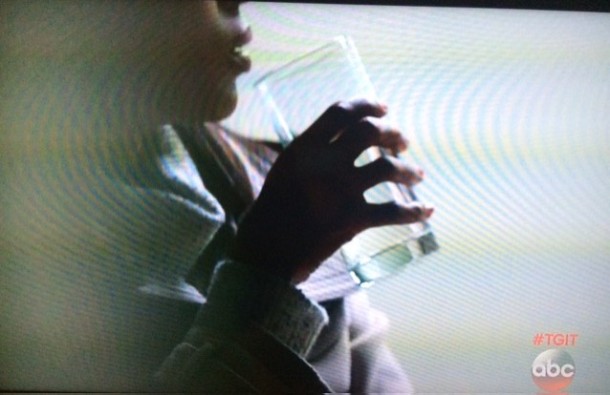 But I will toast to badass Mellie. Seriously, why do people think they can mess with her—especially when she’s wearing red? That’s her power color and you WILL go down. Like, vegetative state down. VPOTUS did not recognize who he was dealing with.

grapefriend comment: Talk about people who are predictable – his scenes are really getting boring.

Liv is really mad at Fitz for going to war over her. FAIR POINT. But the problem with her argument is that somehow she believes he was a great president at any point in time. Did I miss something? Because, as I’ve said before, Fitz is a pretty terrible president (and husband and boyfriend) all the time.

grapefriend comment: Ha, totally. And when did this Ride or Die stuff start popping up? YOU LIVE IN DC. This is Scandal, not Sons of Anarchy.

Apparently we have to wait two weeks for a new episode and my god Liv better be drinking some great wine when it happens.

grapefriend wine comment: Without a doubt, the two week break is for Liv to travel to every DC wine store looking for her spilled Du Bellay replacement. Maybe even hop a plane to a vineyard or two.

Until then, lock up that version of yourselves that doesn’t get any wine…like Jake does with the tortured Huck beast that lives inside of him. See you soon GFs!