Liv is inching closer back to grapefriend status… Abby will walk us through the plot.

Gladiator grapefriends, I don’t know about you but I definitely needed a big gulp after seeing Huck doing the grossest Huckiest of things possible. Also Liv’s been sold to Iran (allegedly…though I still think it’s her dad) so that’s, um, not good and certain members of the US government want her neutralized. Plus she hasn’t had a good red in god knows how long. (What is the timeline here? It’s extremely unclear.)

Lots of other people got to imbibe however. 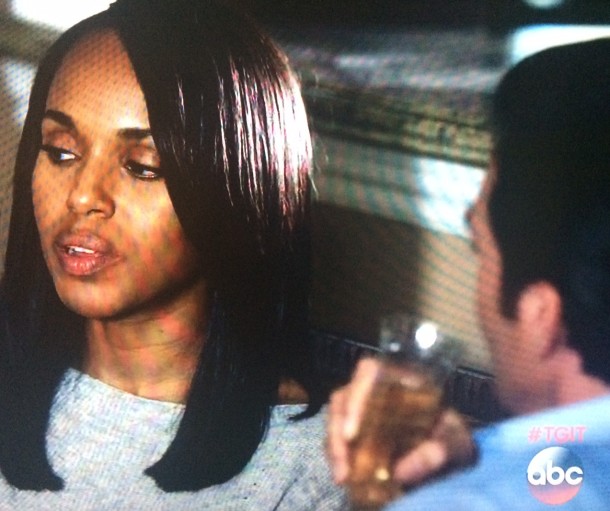 Bye, Ian. We hardly knew you but we do know that you really liked bubbly. At least you got one last glass before one of your fellow henchmen turned on you.

grapefriend wine recommendation: As usual, it was impossible to tell what kind of wine they were drinking (they stick to this blurred label thing even for bubbly). But if you’re about to make over a billion dollars, you don’t skimp. Krug feels too common somehow, and Cristal too clubby, so I imagine Ian would go for something like Salon. It’s $300, mere pennies compared to Liv’s billion dollar price tag. It was apparently good enough that even red-wine-obsessed Liv held tight to her glass even when Ian’s blood splattered all over her. Well done, kind-of grapefriend.

Said henchman not only takes over the Olivia Pope Auction but also commandeers the champagne while uttering the line “No more bubbly, bitch!” Okay, then sir. But we think Olivia could really use of flute of the good stuff. 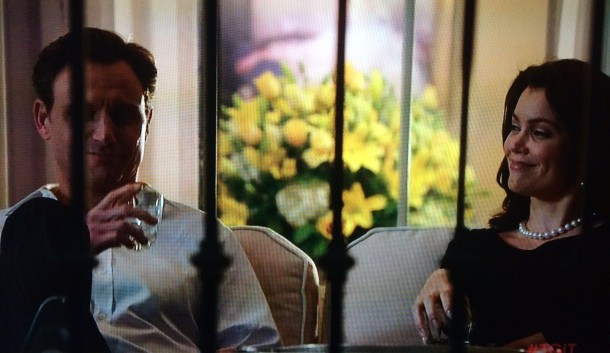 Have the Grants forsaken their beloved whiskey for vodka or gin? It would seem so during their now nightly boozefest on the White House balcony. I like the place these two have come to in their relationship and I really like the idea of Mellie Grant for President!

grapefriend wine recommendation: I think of Mellie as more of a vodka girl, but it’s not exactly the kind of thing Fitz would just be knocking back. I’m going gin and tonic here.

Of course Quinn is a beerfriend. This makes total sense. Not that there’s anything wrong with it. I love a cold beer while watching a football game. But Quinn just seems like a girl who would never drink wine, right?

grapefriend wine recommendation: I agree that she could be down with the hops, but let’s not fail to point out that it was Jake who handed her the beer. He’s the ultimate beerfriend, much to Liv’s chagrin. I bet even Liv would drink a beer right now though.

Will next week be the week Liv finally gets a drink? I sure hope so!