It’s been a long draught without Scandal these past few months – but this week it came back with the fury of a grapefriend denied their grapes! Let’s get to it with our plot recapper, Abby!

Scandal is back, grapefriends, and it brought a whole lot of crazy to our TVs.  Unfortunately this week did not bring many wine moments, though we all definitely needed a glass or two to make it through!

The only glimpse of wine we got this week was in the form of a flashback to the winter finale when Liv shows off the two bottles of the fake wine she loved on the island, pours herself a big old glass, and then while being kidnapped by masked men spills (gasp!) it all over her white couch. This is how we know things are very very bad in Scandal-world because Liv NEVER spills. Like ever.

grapefriend wine recommendation: As Liv said, she was drinking two bottles of Du Bellay – and as we know, Shonda said they just made up this wine. I mean if you’re gonna spill wine, it better be fake! And as a grapefriend pointed out in the comments the other day, this is what they use for Liv’s wine on the show – LOVE IT: 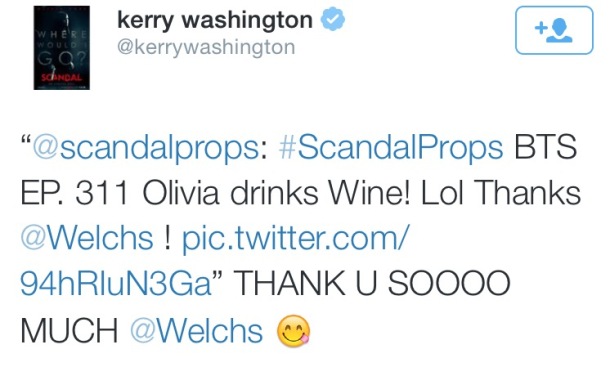 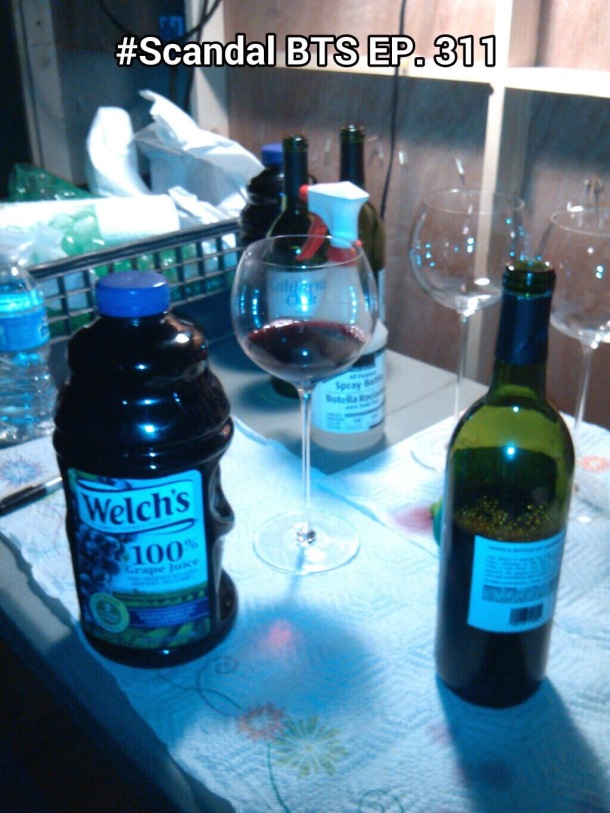 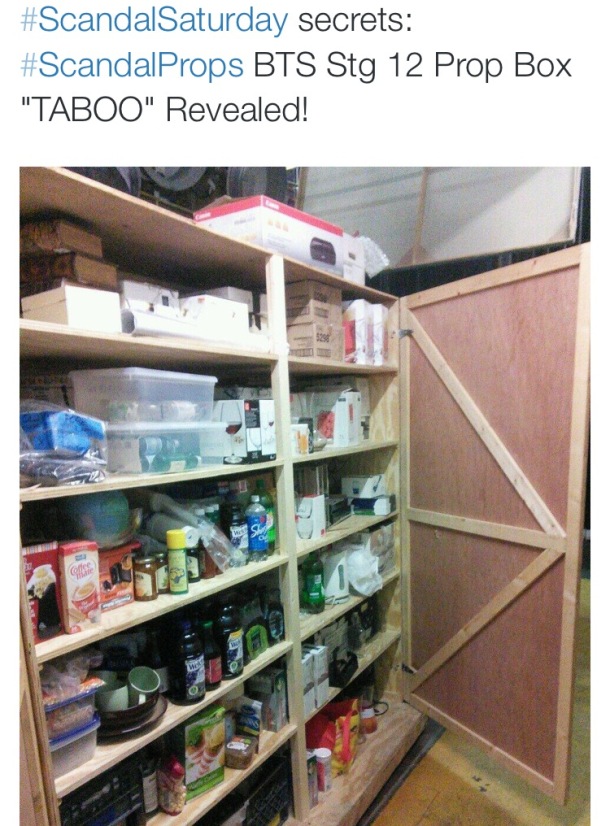 I need a glass of wine moment #1

There were many WTF twists in this episode and it all started when we found out Liv was in the apartment across the hall right after she was taken and Jake ran into the street in his underwear (thanks Shonda!) thinking she was in a car speeding away.

grapefriend wine recommendation: If you want a naked type of wine, you can get a “natural” or organic one. This basically means they don’t put anything on the grapes (like pesticides) or in the wine (like sulfites). Many aren’t good, but a lot are. Some people even say that not having sulfites prevents headache, but it’s not fully proven (and half of your headache is just from alcohol anyway!).

I need a glass of wine moment #2

Pretty much the entire time Liv was in that cell was high drama of the Shonda variety, especially when she was trying to escape in the bathroom using the underwire from her bra. How very MacGyver of you, Ms. Pope! Though I don’t believe for a second that her nail polish wouldn’t be chipped at that point. Even the best gel mani couldn’t last under those conditions.

grapefriend wine recommendation: Stuck in a prison cell? Why not have some wine aged in a cement tank! These have been getting more popular lately, and a lot of wineries I visit have one or two of these concrete egg-shaped tanks in their barrel rooms. Basically, the concrete is porous, so oxygen gets in the tank during fermentation. The small top of the egg lets the oxygen bubbles that rise during fermentation create a current and keep the wine moving around. It makes a fuller, creamier wine. Wineries like Cliff Lede, Three Sticks, and Domaine Carneros have used them.

I need a glass of wine moment #3

The big reveal at the end showed us that what was behind the big red door was…a soundstage. Liv might actually still be in DC! Though I have to say that for all of her I can read people bravado, sometimes Liv is very, very bad at reading people. It was so obvious that her cell buddy was a bad dude and like the big bad boss. Come on, Olivia!

grapefriend wine recommendation: I actually called that they were still in the US, but didn’t call that the cellmate was the bad guy. I just thought he was going to be on of those annoying menaces holding her back when she tried to escape. Also, the soundstage trick just happened on The Blacklist so I wasn’t very pleased, but it was still good. Annnnnyway, to celebrate Liv’s still-in-America location, she can drink any of those American cement egg wines above.

And an honorable mention goes to the dream in Vermont. What kind of wine should we pair with all that jam, Grapefriend?

grapefriend wine recommendation: If that was filmed in Vermont, I didn’t graduate from Middlebury (which is in VT, and from which I did graduate). Boysenberry flavor is actually a common descriptor for Cabernet Sauvignon, so I think Liv would have to go for that. In fact I’m surprised she wasn’t walking her dog with a big glass of red in her hand – it WAS a dream sequence after all…

Until next week when I hope Liv gets a big old glass of red for her troubles!

grapefriend: Me too! I hope this bad guy is the kind that likes expensive wine, like Sloane in Alias. (I had to ask Abby what his name was – but at least I knew he existed!). He’s a real grape-enemy haha.

This was a total coincidence, but I'm drinking red wine (Nebbiolo) and eating popcorn – and #Scandal returns tonight! pic.twitter.com/DNDOHZenM6