Back from a great trip to Rias Baixas, which is in the Galicia part of Spain, right north of Portugal. At this point I’m probably more Albariño than human, but while I detox I’ll share the more interesting things I learned.

1 albariño is the star grape

Most wine growing regions grow a few types of grapes, even if it’s just one main red and one main white. But in Rias Baixas, 96% of what they grow is Albariño. A few others come into play for blends, like Loureiro and Treixadura, and then there’s a small percentage of red grapes like Caiño that make some earthy, dirty wines. But really it’s all about Albariño.

2 but they really max out its potential

We had all different styles of Albariño: solo, blended, and sparkling (rare, but so good). 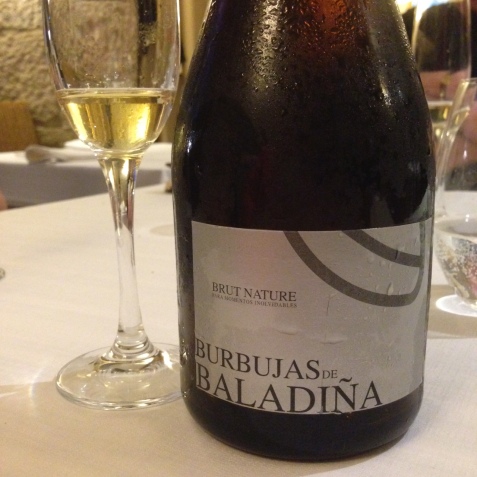 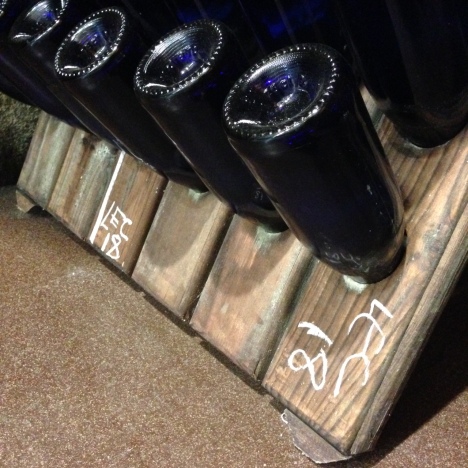 pupitres of the sparkling Albariño at Mar de Frades

Plus a crazy strong grappa-like liqueur called aguardiente (combo of the Galician words for water and fiery) they add herbs or burnt sugar to. 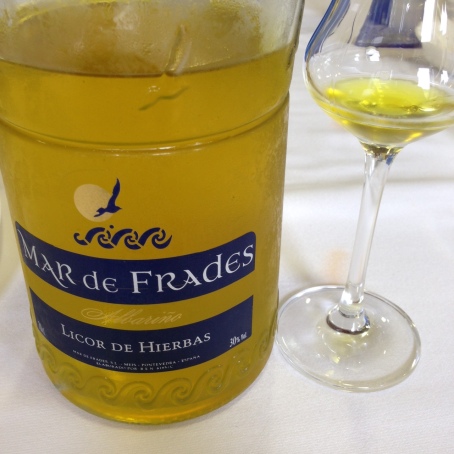 We even had a gin made with Albariño!

We had a few older Albariño’s, and even did a flight at Pazo Señorans to see the differences from the 2010 through 2013 vintages. We tried a 2006 that still had crazy acid, so it can definitely age (and goes great with potato chips). 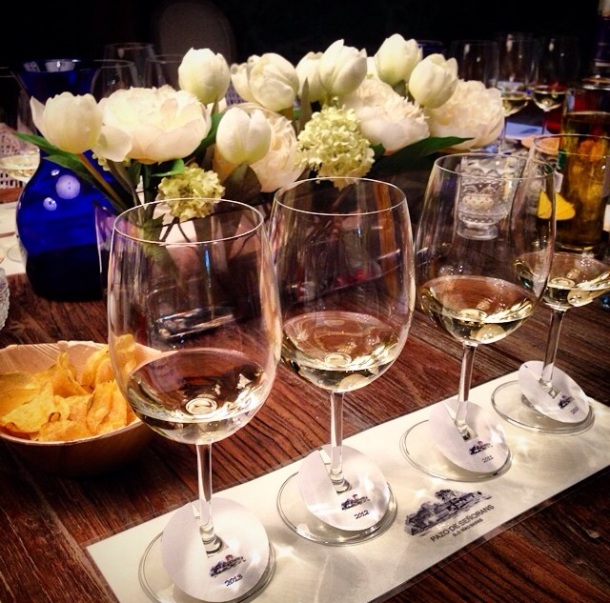 That said, I personally prefer Albariño when it’s young and really fresh, lively, and crisp.  So since that’s usually what’s available in the market, we’re all lucky. 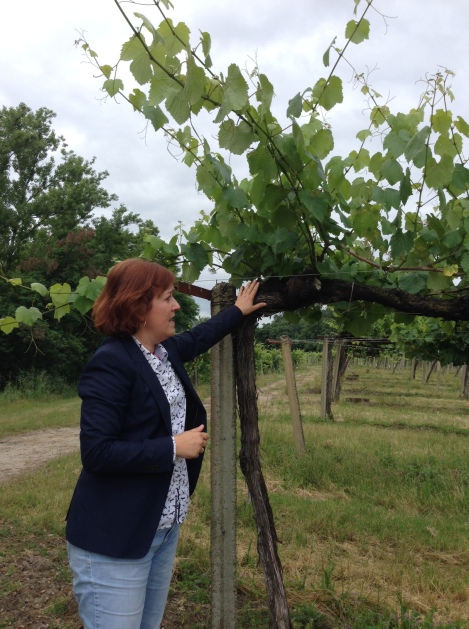 In the wine world, there’s often a lot of talk about how there aren’t a lot of female winemakers. In the past that was true and even today it’s probably mildly statistically true, though the gap is shrinking. But in Rias Baixas, women have always been the ones cranking out the wine. Rias Baixas is a fishing region and the men would always go out to sea, leaving the women home. Rather than just sitting around without any wine (the horror) these women made the wine themselves, and that part of the tradition continues through today. We visited 9 wineries on our trip and 7 of them had women winemakers. 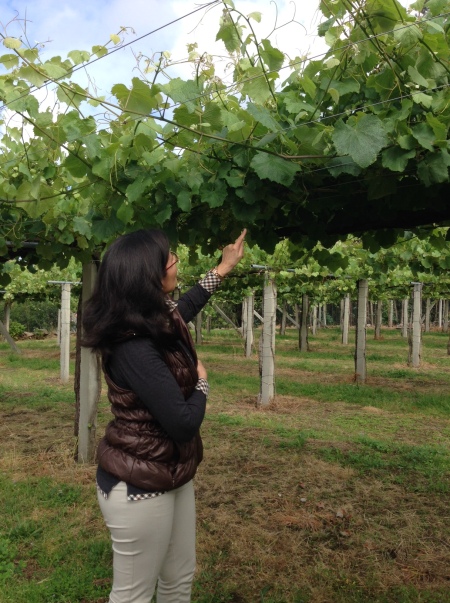 5 they wear heels – even in the vineyard 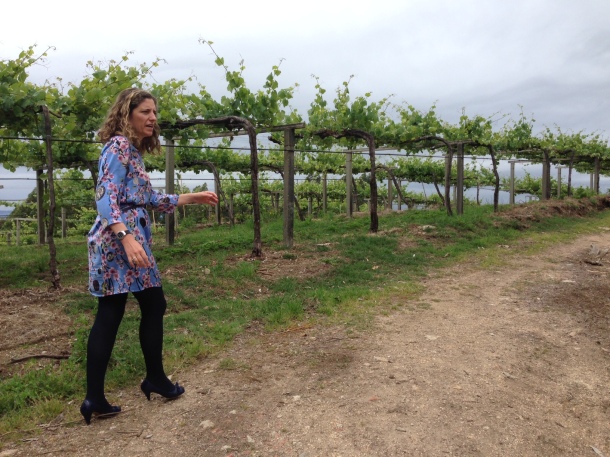 Probably because of #4, you don’t just get Carhartt jackets and hardy shoes among the vines. At Mar de Frades and Martin Codax, both the winemakers were in heels. OK fine, so they were greeting us as guests and probably don’t wear heels every day, but I wanted to note it as I’ve been made fun of on wine trips for less. When I was in Walla Walla a few months ago, we were hearing a talk about soil in the morning and I wore heels (I’m short, and wear heels almost every day). One of the vineyard guys saw and asked someone, “She’s not going to wear those in the vineyard is she???” HA. I wasn’t, but it’s not like I didn’t wish I could! Hats off to the Rias Baixas women who do. Baller. 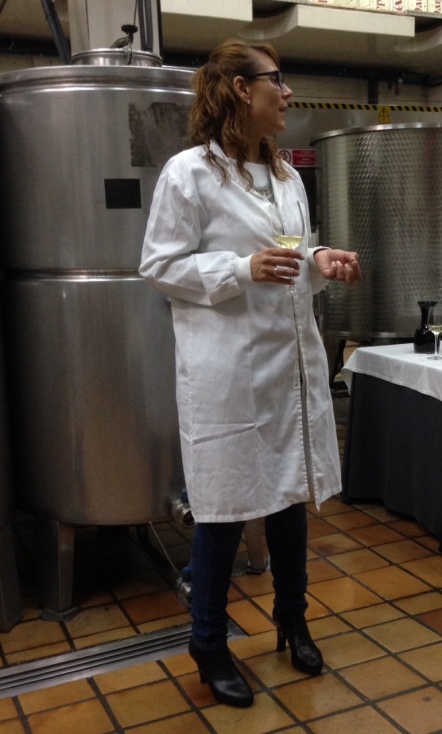 Rias Baixas officially has 5 subzones – most Albariño is made in the Salnes Valley, but there’s also Condado do Tea, O Rosal, and then a tiny bit in Ribeira do Ulla and Soutomaior. We did a cool tasting of the three main subzones at Martin Codax, where they’re doing detailed analytic work to determine the differences in each location.

The Salnes one had fleshy peach, yellow apple and yellow florals, a hint of minerality and medium acid. The winemaker, Katia Álvarez, said Salnes is known for being more “masculine,” earthy, and minerally. The one from Condado do Tea had more white florals, white berries, and yellow apple with some white peach. It was creamier and had a bit less acid. These are known for being more elegant, spicy, and vegetal, with more volume at the start but a shorter finish. Last, the Rosal was light pink rose petal, with mellower white peach and green apple. Katia said Rosal is known for producing the more “feminine” style of Albarino, very floral and with a long finish.

7 goes great with seafood – and a lot of it

The crispness and the tart, citrus fruit in Albariño makes it an awesome companion for seafood. And also, just for sunny summer days. We had a ton of both. 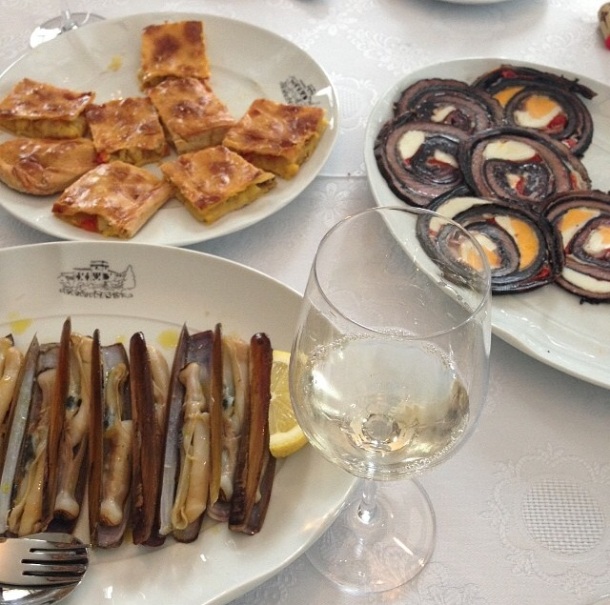 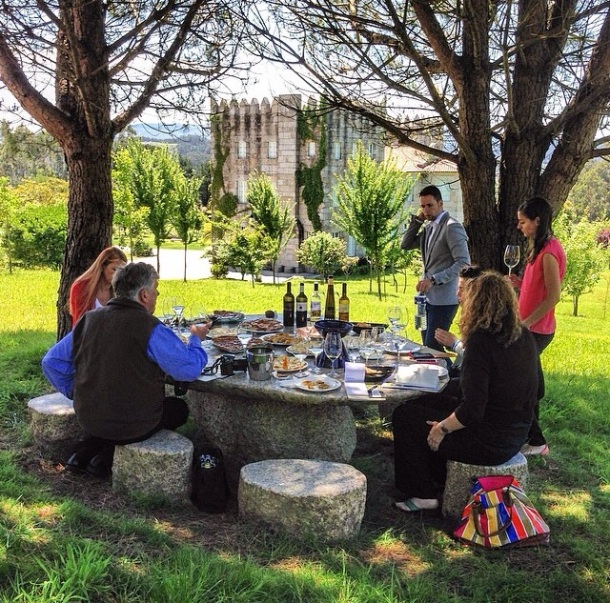