It’s our final Scandal wine recap (so sad), and Abby’s back with deep and meaningful insight into the inner workings of this show as grapefriend plies her with wine.

First, let me just say that grapefriend sure knows how to throw the BEST #ScandalFinale party in town. We had goblets of wine and more popcorn than Olivia and Cyrus could ever consume. (I miss those days when he used to come over and hang over a good bottle of red!) 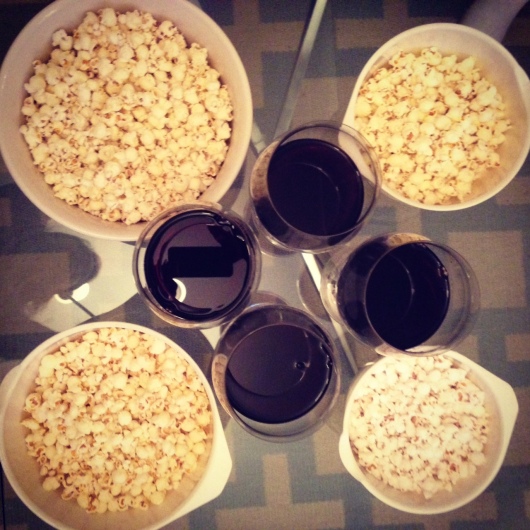 But now onto the show. We will now be without until fall which is very depressing. But at least we’ll no longer have to deal with “Wombouflage” as Kerry will have birthed what is sure to be an adorable baby. (Thanks for that term, ladies of Go Fug Yourself. They also brought us “wine cardigan” so Gladiators, we owe them a lot!)

Liv didn’t drink on camera during this episode—but she really should have. So I give you the “should have been wine moments” from the season 3 finale.

the first five minutes of the ep

Liv was dealing with the possible death of her dad, a bomb (set by her mother) going off at a major political funeral, and the fact that Fitz was getting split-screened and then bumped off every network completely by Sally Langston’s faux humanitarian efforts after said bombing. This is when day drinking is acceptable at the office, right?

grapefriend wine recommendation: This requires some rugged, bold drinking. Liv should’ve headed straight for a bottle of inky Petite Sirah. Despite its name, there’s nothing petite about it and would’ve done her well through all this insanity.

everyone’s sure they’re losing the election

Drink like Mellie, y’all! Because really drunk Mellie is the best Mellie.

grapefriend wine recommendation: Mellie loves her vodka, but Olivia needs to REALLY start wielding some influence over the First Family and getting them onto the grape. If you think you’re about to be kicked out of that Oval Office, drink some Carménère. It used to be one of the grapes that Bordeaux put into its beloved blends, but then they kicked it out.

Sure, your relationship is super duper complicated, but when your father recovers miraculously from an assassination attempt…you toast! (Though if you knew what we know by the end of the episode…maybe not.)

grapefriend wine recommendation: Celebration time! Grab a vintage Chateauneuf du Pape, which is my dad’s fave wine (and a fave of Cyrus too).

We definitely don’t support drinking away your problems but we may have to make an exception so we can forget these Huckleberry Quinn love scenes. Because…..EW.

grapefriend wine recommendation: Ew is right. Amarone has a super high alcohol level (like over 15%) and will be your best friend in helping you forget this scene.

when the liv & fitz music plays

Pour a goblet of red wine and think of the days when Olitz was all charming and sexy. (By the way the song is called “The Light” by The Album Leaf and yes I’ve had it on my iTunes since the very first time Kerry Washington tweeted the name of it way back when.)

grapefriend wine recommendation: Pour out some Burgundy into said goblet. Elegant, earthy, rich, complex Pinot Noir is one of the sexiest wines around.

Packing and unpacking automatically equals wine drinking in my house. But seriously one of the most unrealistic things on this show filled with unrealistic things was Liv packing her own boxes. The women wears a different $5000 coat every day. She would FOR SURE have movers do that. Though I do hope she carefully wrapped her giant wine glasses.

grapefriend wine recommendation: The fact that she didn’t have wine poured out for this scene is troubling. All packing requires wine, and an everyday one is just fine. One of my favorites is Pine Ridge’s Chenin Blanc/Viognier blend, which is only $15 and also happens to be awesome for spring.

papa was a rolling stone

Well okay then, Papa Pope. We definitely see how you roll now. I know I needed a drink after finding out what you did to poor Jerry Grant. But kudos to the Scandal music department for this stellar choice of song to go out with because season 3 really did come down to a WHOLE LOT of Daddy issues.

Until next season Gladiator Grapefriends! (PS: Where do you think Liv and Jake are going? I’d take that jet to the Maldives if it was me. Follow along on Twitter @grapefriend and @abbygardner to see what we think, unless we’ve actually gone to the Maldives ourselves, or a vineyard.