So excited for the second season of House of Cards, all of which is now gloriously on Netflix for my viewing pleasure. Being grapefriend, one of my favorite things about the first season was how much good wine they all drank. Let’s take a look back.

1 Zoe gets down to business she pours herself a glass of Casa Lapostolle – their Cuvée Alexandre to be exact, which has a few varieties but my fave is the is the Carmènere (96% Carmènere, 4% Merlot, and 100% awesome). Lapostolle is actually a great biodynamic winery in Chile, and the Carmènere is not only delicious but a great choice at $15 if you’re on a budget like Zoe. 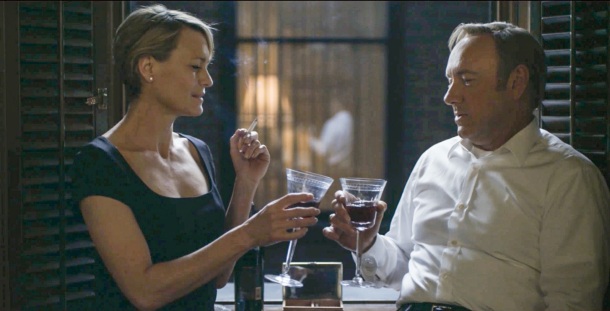 2 When Claire ditches the photographer and comes back home, she and Francis share some red. They really hid the label well throughout the whole scene though, so I have no idea what it is.

3 After Claire keeps visiting fridge town to fend off heat flashes, she pours out a glass of Chalk Hill Chardonnay for her and the other wife who came to dinner. Perhaps the biggest grapefriend of all, that other wife instructs Claire to pour it all the way up to the brim.

4 At the party that Francis and Claire did impromptu on the hotel steps, one party guest wields a bottle of Chimney Rock. (I’d ideally opt for a Zin with all those ribs they got from Freddy, but Chimney Rock Cab is great.) I had lunch with the winemaker a few weeks ago and she told me that her friend is one of the show’s producers. Good to have friends in product-placing places!

5 The last and maybe biggest grapey moment was when Francis comes over to Zoe’s. She can’t find a wine opener, so Francis takes his shoe to hammer a pen into the cork, pushing it into the bottle. Not the cleanest way to open a bottle of wine, but you get your juice. Pretty resourceful of that Francis and quite in character I’d say. Zoe spits out the wine saying it “turned,” which honestly probably wouldn’t really happen with a Chardonnay you just got at the store. Right after that, Zoe traps a spider in her empty wine glass to get it out of the apartment without killing it. The symbolism of this has been chatted about a lot online, like how people are trapped and can’t get out from under Francis’ manipulation. I just like that a wine glass was used.

So as you binge watch Season 2, grab some of those good grapes. There’s also actually a winery called House of Cards which does all single vineyard wines, but it’s in Margaret River, Australia so shipping would be massive. I’m sure Francis would have a way to get around it…