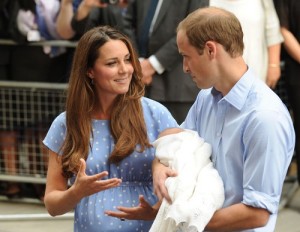 A brewery in Hertford, England, made a special royal baby ale called Heir Raiser. It’s made by McMullens Brewery and is described as a “light coloured, crisp refreshing pint with a light, hoppy finish.”

Well, since Kate’s fancy hospital wing had its own wine list, I think George is definitely going to be more of a grapefriend when he grows up. Obviously, he has to have a wine named after him too, so let’s make one right here! But what should we call it – and what grape should we use? Here are the options:

Made from Gewurztraminer, which is a white grape from Germany that’s super aromatic (crazy lychee), low in acid, and even a little sweet.

The Garnacha grape is low in acid in tannin, and high in berry flavors and sugar. It’s usually blended with Tempranillo in Spain, and with Syrah And Mourvedre in France (where it’s called Grenache) to make Chateauneuf du Pape (regal link)!

This one would be made from Gruner Veltliner, a light white grape from Austria usually drunk on the younger side. It often has some white pepper and grass notes plus a little fizziness – very refreshing.

Since we’re a democracy here in America, what’s your vote?

2 thoughts on “georgie gets his grapes”

Kobe often compared his game to wine, nicknaming himself Vino and saying his game got better with age. The Warriors gave him a bottle of wine with a personalized label of his No. 24 jersey when he retired. Amazing tribute at the Grammys just now. RIP and peace to the family.