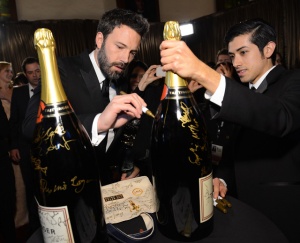 The SAG Awards were a while ago but they always get winners to sign swag backstage that they auction off. Proceeds go to the Screen Actors Guild Foundation, which supports children’s literacy programs, emergency relief for union members, preservation of union members’ creative legacy and scholarships. The auctions end tonight around 9pm EST and this year there’s some great grapey stuff on the block!