So last night was Game 1 in the ALCS, but let’s take a step back to each of their victory celebrations prior to making it to this leg. If their bubbly celebration choices are any indication, I think we may have clear winner.

This is how the Yankees celebrated: pouring out some Beau Joie champagne all over the place:

Beau Joie gets its grapes from Epernay in France, as many champs do. It’s a particularly good bubbly-spraying choice because it comes in a copper suit of armor which keeps the champagne colder longer and provides improved grip when opening and serving. Sounds like it would be a pitcher’s choice. Also, it has a rubber punt (that concave thing at the bottom of a bottle) that gives it more stability when pouring. Apparently they were also rocking some Moet:

This guy’s back to the Beau Joie, though NO ONE can look good in these nerdy goggles, I don’t care if they protect your eyes (PS ditto for anyone wearing Google Goggles – and Fashion Week should know better):

Then there was this – but I think Sabathia was cringing over the use of “campaign” instead of “champagne” in the caption. I get that we’re in election season, but for god’s sake do you not have editors?

And then here was how the Tigers celebrated: 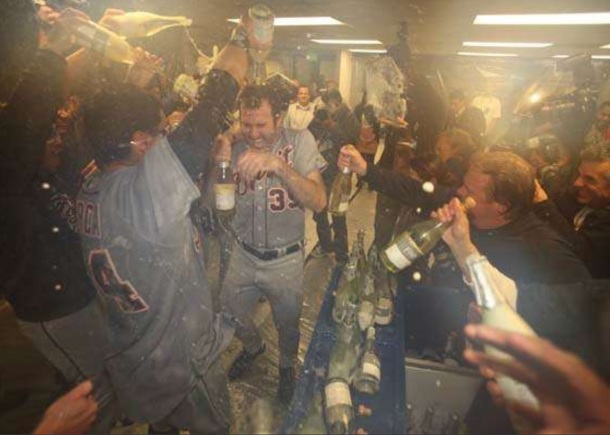 Still with the weird Fre Brut stuff. I’ll give them points for it looking like a very grapefriendy time (check out all those bottles lined up), but it doesn’t really stand a chance to Beau Joie and Moet. The Yankees lost the game and lost Jeter last night, but the grapefriend-o-meter says they have this locked.