So last night I’m hanging at this WSJ Magazine event at Burberry for the launch of The Britain watch. I was happy enough just sipping on my Veuve when I heard there were Giants on premises: cornerbacks Prince Amukamara and Justin Tryon. Well of course I had to meet them, and they were really lovely guys. And when I say Giants D are huge grapefriends, I don’t mean in size.

Not two minutes into talking to Justin, he and his girlfriend said he loved wine! Then he was telling me that Justin Tuck (Defense CAPTAIN, no less!) also loves wine and has a huge cellar! Dying. We didn’t get into specifics of what they like to drink, but I feel like Defense players have gotta go Cab – it’s structured, bold, and the backbone of so many blends. 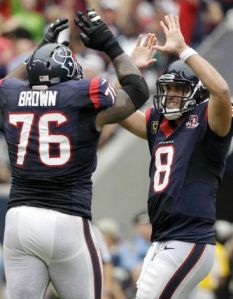 “YES, dude, we are totally getting our own wine!”

Coincidentally, today’s post was going to be about how the Miami Dolphins and the Houston Texans just announced a partnership with Santa Rita wine. The winery’s going to advertise during radio game broadcasts and in Dolphins’ and Texans’ print materials, and promoted in pre- and post-game programming, on their Facebook pages and websites. It’ll also be available in stadium lounges and bars.

To be honest, though, I’m not that excited about this one. Santa Rita’s good as a price point comparison for beer drinkers, but it’s kind of cheap wine so I don’t think it’s gonna convert any of them to the grape.

Anyway, Santa Rita’s also working on making a Texans-branded wine for next year. I told Justin that a lot of NFL teams now have official wines, which he didn’t know. Hopefully, he can lead the charge for getting one for the Giants! PLEASE GOD PLEASE. And don’t make it a crappy one!