Hello. My name is grapefriend. I have Princess Bride wine news. Prepare to die.

the battle of wits

In honor of the 25th anniversary of The Princess Bride (and just in time for Valentine’s Day), restaurant-theater chain Alamo Drafthouse has created a wine program called “The Bottle Of Wits,” named after the “battle of wits” scene in the movie where Westley rescues Princess Buttercup. The line includes two kinds of wine: “Inconceivable Cab” with black currant, plum and black cherry flavors and “As You Wish White” with tropical fruit, green apple, and citrus notes. They haven’t provided more info than that other than that it’s from “California.” Still, this is kind of more about the novelty! 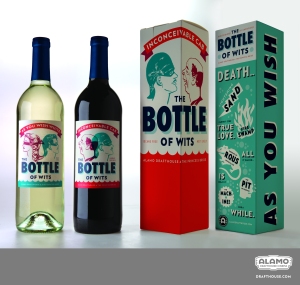 Apparently the idea came about when they were drinking and talking about their favorite wine-centric movie scenes. Two others that came up were the Sideways spit bucket scene (too gross) Silence of the Lambs Chianti slurp (too creepy), so it’s easy to see why they went with Princess Bride!

Anyway, if you’re in Austin they have a Princess Bride quote-along event and themed feast that’s paired with the wine. If not, you can buy the two-pack for $56 online here. They also have t-shirts and wine glass charms if you’re really a die-hard fan of the movie and of wine, but purchase as you wish.