It’s New York versus San Fran in the NFC Championship this weekend and we’ve got a winner already on grapefriend! We’re talking about New york Freaking Cuvees!

San Francisco thinks it’s soooo cool with its Napa and Sonoma and 49 other overpriced wine places. But New York is making some damn good grape plays. My two favorites lately are from the Finger Lakes: 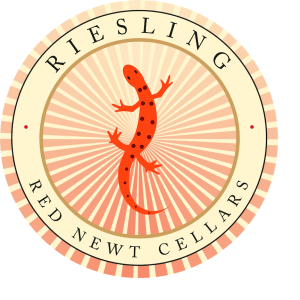 You usually think Germany for Riesling, maybe Alsace or Austria, but I’m telling you the Finger Lakes ones rule. That’s probably because the FL climate is similar to that of the Rhine in Germany, and this dude Konstantin Frank figured out that they should be planting the grapes that do well in Germany. I love Red Newt’s and they have a cute label, so give it a whirl.

This is a freaky name and no one’s heard of it, but it’s actually one of the oldest vinifera grape varieties. The wine has steely, really crisp acid with some lime and lemon. The winemaker notes also says edamame but come on, dudes, let’s not go crazy with the flavor notes. It also gives you a fun little spritz on the tongue. Overall, very yumballs. Hit up our friend Frank for this one, it’s $20 at my local place but you can find it for a few bucks less.

As for what the Giants have to say to the 49ers, I’ll let the grapes speak for themselves: