Madonna is known for breaking records, and here’s another – the first person to make a grapefriend appearance two days in a row! Yesterday we told you all about the sparkling horror that occurred at her directorial debut’s after-party. Today, we bring you news right from grapefriend’s home turf: the Upper West Side! 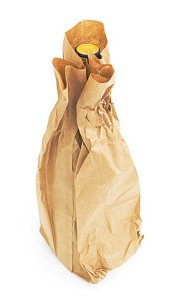 According to the New York Post, she and her 25-year-old dancer bf went to this place Osteria Cotta, a new restaurant and wine bar. Now when I go to a wine bar, I’m usually pretty stoked to try what they have, figuring they know what they’re doing. But not Madonna. She waltzed in not only with her own red wine, but her own wine glasses too. This is one crazy grapefriend.

First of all, bringing your own glasses is random. I’m thinking she either thinks people are going to sell her sipped-out-of glass on eBay, she’s a germaphobe (the Post source’s hypothesis) or she’s one of those people who likes to match a wine type with the “perfect” glass for it (which grapefriend usually calls bullshit on – just drink for god’s sake).

But the enigma deepens. She brought the wine in a paper bag! “They poured the wine and immediately put the bottle back in the bag, so nobody could see what it was,” said the Post source. “At the end, they took the empty wine bottle and the glasses with them.”