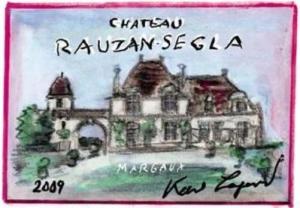 Fashion blogs have all been reporting on the new designer wine labels coming out this fall, and I love that wine’s getting all this chichi press!

First we have Karl Lagerfeld designing one for Château Rauzan-Ségla’s 350th anniversary. This is a Bordeaux that’s classified as a Second growth, which means it’s one level under the highest of Premier Cru. It’s also been owned by Chanel since 1994, hence the phone call to Karl for the sketch. You can get a 2009 for about $100, but you’re gonna want to hold it for a while.

Next, like a waaaaay lower-end version of both Rauzan-Ségla and Chanel, California winery Clos du Bois got Banana Republic’s creative director Simon Kneen to design labels for their Cabernet and Chardonnay. These’ll set you back less than $20 each.

Designers may be new to wine label art, but Chateau Mouton Rothschild, a Premier Cru Bordeaux, has been commissioning artists to do their labels since 1946. You can see all of them here and it’s fun to scroll around (my favorite is the 1970 Chagall one). I do love the scandal around the Balthus one in 1993: he did a label that had a reclining nude girl and it was rejected by the US! Jeez, US pull it together. We saw more hoo-hoo in Basic Instinct. So they cropped it and just had a monochromatic label. Guess you could say the US doesn’t like label whores. 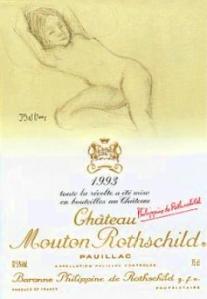 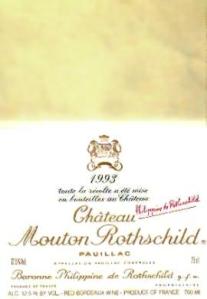 One thought on “label love”