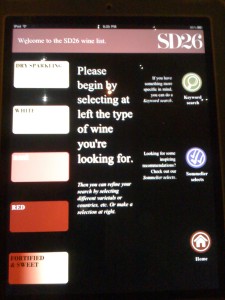 So the other night I was out to dinner at SD26, on Madison Square Park, and the sommelier handed the wine menu to one of the guys. This gave me anxiety. I like to be in charge of what I’m drinking, and usually waiters automatically hand the wine menu to a guy. So this guy had the menu and was studying the thing pretty hard, so I figured he was into it and knew what he was doing. But when someone mentioned I was into wine he handed the menu over faster than a bottle of Yellowtail, relieved to be rid of it.

Awesomeness #1: I got to pick the wine. Awesomeness #2: the wine list was on an iPad! For someone into wine, this is like being handed the ultimate version of Angry Birds ever made. It was sort of embarrassing after a while because for like 10 minutes I was barely paying attention to the conversation, but I couldn’t help myself. It was too fun to be able to select different categories and then have all the options pop up. Then you just keep playing with do you want a white? From Germany? Which variety, which region? Then everyone decided to eat heavy, so we had to go red. Loving Spain these days, so checked out all those. Then I swiped over to France, where almost everything was out of budget even on an expense account but reading the list is like wine porn so I had to swipe around for a while just to see what they had. Finally I checked out the Italians, which I usually don’t order since they’re not my favorites. I saw a great Aglianico and after a bit of explaining what it was to the table, everyone was game so we got that.

Finally I had to order and hand back the iPad. At least the Aglianico came to ease the pain.