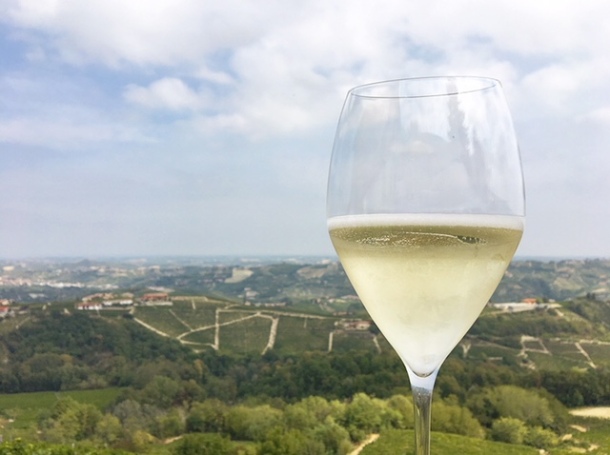 Prosecco has really grown in popularity lately because it’s peachy and much less expensive than many other sparkling wines. The danger is that so much of it’s being made now that the quality could go down, which is basically what turned a sparkling like Asti into an entry-level “supermarket wine.” Prosecco lands in the middle price range – it’s not $100 like higher-end Champagne, and not 5-10 bucks like Asti – and Martini pays attention to the fact that they need to keep selling it at right price to sustain it.

Martini & Rossi made their first Asti Spumante in 1901 and that’s still most of their production, but they started making Prosecco in the 1990s. They actually don’t own any of the vineyards that their Prosecco grapes come from, but they supervise them with the vineyard managers and farmers in Valdobbiadene, Pavia, and Asti. They then bring the wine to their facility in Pessione for second fermentation in tanks.

We went there and got to sample some Moscato juice before it got fermented. It was delicious!! Like fleshy yellow apples and Lipton tea, and pretty great with some salumi (and this was for breakfast, just fyi). 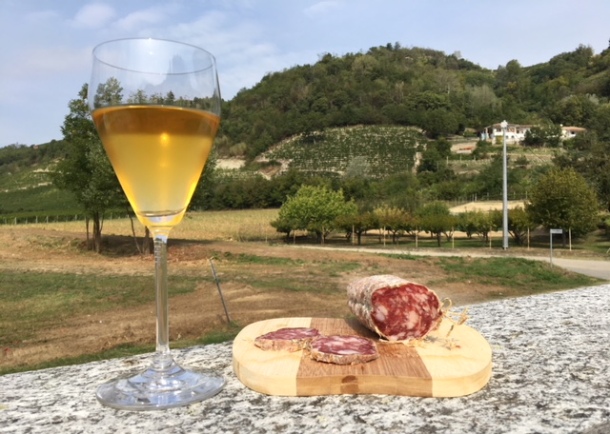 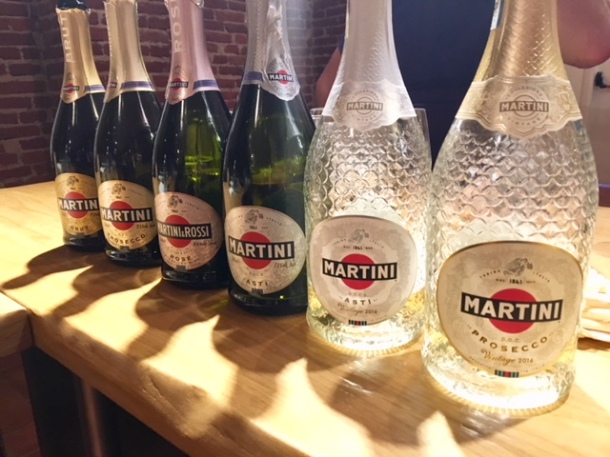 First we had the Brut which is made from Chardonnay, Pinot Bianco, and Garbanella (that was a new one for me), which are all grapes from the Veneto vineyards. It’s light and refreshing, and a great palate-cleansing aperitif.

Next up was the Prosecco which is 85% Glera and 15% Pinot Noir and Chardonnay (though they change that mix to keep consistency). They make 5 million bottles of this stuff, so plenty to go around for those who like a sparkler with fruity apple and pear.

The dry rosé is made from Riesling Italico, Chardonnay, Glera, and Nebbiolo. This one has bigger bubbles and a light strawberry nose. We also tried the demi-sec (slightly sweet) sparkling rosé, which has a mint nose and tastes like strawberry sorbet – perfect for dessert.

Finally, their core Asti is 100% Moscato Bianco and pretty sweet with 75 grams of sugar. It has a medium-light body and is like sipping on some very light peach syrup.

These all go for only around $12.99, which is a great value. They also make a sparkling Riesling, though it’s actually Riesling Italico which isn’t genetically related to Riesling. It’s better for sparkling as it has a more complex structure which is better for aging. This one had a very clean nose like fresh spring air, and notes of light white flowers and a hint of lemon.

For the first time, they’re now making a vintage Prosecco from each year’s best grapes from the best vineyards in the Conegliano region of the Veneto. The Collezione Speciale Vintage 2016 is 100% Glera. It’s less sweet than the regular Prosecco, and has really cool sage and tarragon notes that the winemaker attributed to a different yeast and fermentation temperature (16-18 versus 20 degrees Celsius). This one will be available in the US in 2019 and will likely range between $19.99 and $24.99. Also love the pretty quilted bottles the vintage wines come in. It was my favorite of the whole lineup, so can’t wait for it get here!

They’re also making a vintage Asti from a special selection of Moscato vineyards older than 50 years, which produce a very authentic flavor of the grapes. They do a very gentle pressing of the grapes and then ferment the juice colder in big tanks. This one tasted more like a very light lemon meringue, and again I got those cool sage notes. There aren’t any plans to bring this one to the US yet though.

Now, tastings are great and all, but what’s wine without a little food to go with it? 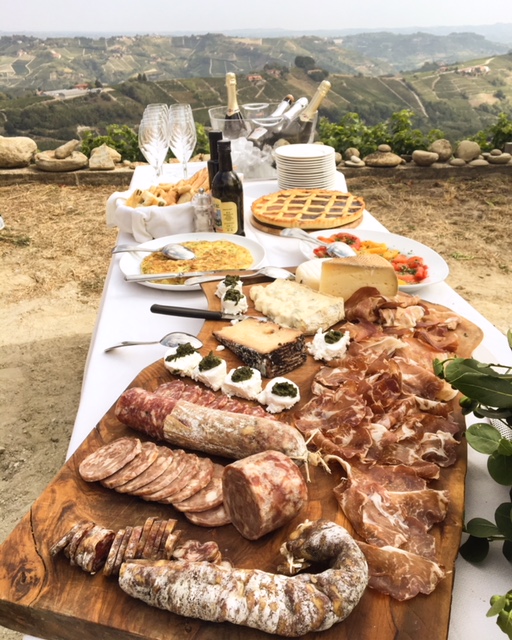 We headed to the stunning Moscato vineyards in Santo Stefano Belbo, where they make the D.O.C.G. production of the Moscato Bianco Asti. The vineyards were pretty steep and had a gorgeous backdrop.

Then, time to feast it up! People tend to pour still wines at meals, but for al fresco lunches sparkling wine can be amazing throughout the whole meal. The Prosecco paired well with lighter foods like bruschetta and grilled vegetables, and the sweet Asti was perfect with homemade jammy torta.

So the next time you’re in Piedmont just remember it’s not all about the Nebbiolo. The Casa Martini museum is an awesome place to visit, and you can spend some time in the amazing nearby town of Torino. Check out the non-grapey sites here on escapefriend.

2 thoughts on “sparkling times in piedmont”