Obviously, I’m a huge fan of wine and a huge fan of football. So whenever I hear about yet another NFL-er grapefriend, I get very excited. Von Miller is my new cause for cheer, since he just gave every player in the AFC West a bottle of custom-made wine – that’s 289 bottles when you include practice squads and players on IR! 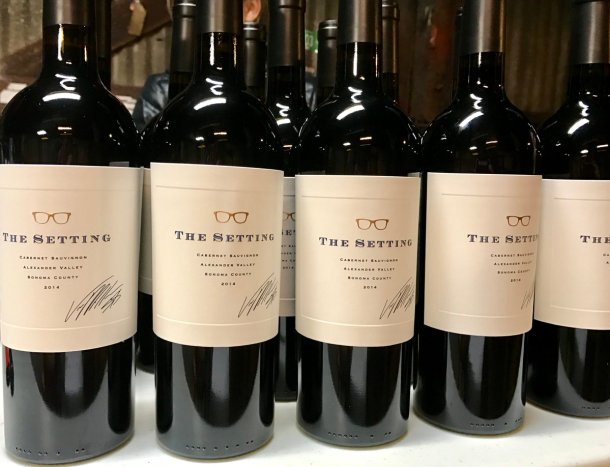 Von, last year’s Super Bowl MVP, thought about a whole bunch of things to give the guys on the teams until he settled on wine. GOOD CHOICE, DUDE. The wine was a 2014 Cabernet Sauvignon called The Setting, which is from Alexander Valley in Sonoma and described as a “dark, opulent red/purple hue with aromatics of wild blackberries, blueberries, and baking spices.” It was created by Jesse Katz, a Boulder native who also made the custom wine for Justin Timberlake and Jessica Biel’s wedding. As Jesse told the Denver Post, “The Setting was all about the setting in which you’re enjoying the wine and who you’re surrounded with. So it fit the reason Von was giving the wine as gifts to all his fellow players in the AFC West.”

The label features orange eyeglasses (Miller loves rocking big ones himself) and this is the note he sent with the bottles, which I think is super cool:

It is an honor and a privilege to take the field and compete with you twice a year. We are so fortunate to have this opportunity to fulfill our childhood dreams of playing in the NFL. The blood, sweat, aches and pains, and endless hours spent watching film are a testament to the love and dedication we have for this game. So take a moment, reflect on all your successes, and enjoy your accomplishment. Appreciate those who have helped you get this far, and start working towards your next childhood dream.

Thank you for helping to make our game great!

The first 100 people who donated $500 to Von’s Vision foundation, which raises money for Denver-area kids to get eye care, were also able to get a bottle. Or, you can get one for $85 here.

I’m the last person who wants the offseason to be here, but I want Von to come to NY and grab a drink with the grapefriend MVP.