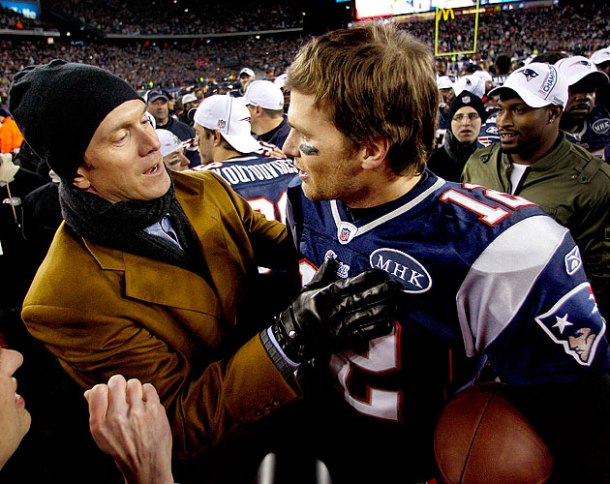 As a Giants fan, I’ve had the joy of beating the Patriots twice in the Super Bowl. So it makes me sad that Patriots fans can’t get certain wines shipped directly to them for consolation. It makes former Patriots QB Drew Bledsoe sad, too.

After he retired from the NFL, Bledsoe moved back to his hometown of Walla Walla, Washington and now makes Doubleback wine there. But since Massachusetts is one of 10 states that bans direct shipping from vineyards, he can’t ship his wine to anyone in the state where he played for so long, including one Tom Brady.

“Brady bought some, but we had to send it to his dad’s house in California,” Bledsoe told people in March. The even bigger problem: “His dad drank it all.”

Clearly, it was time for action. Bledsoe went to the Statehouse to lobby MA lawmakers to get rid of the law. And this past July, the whole state did off-season touchdown dances when they created a provision of the new state budget that did just that! Fans will have to wait til the playoffs though, since the new law doesn’t go into effect until January 2015.

Interestingly enough, although Massachusetts vineyards don’t produce any great wine themselves, the state is in the top 5 for per capita wine consumption. The non-direct-shipping thing had been in place to protect liquor stores, but it then winds up limiting grapefriends’ choice of what wine they can buy in the state, and wines can be priced higher without more competition. Although local retailers in Massachusetts could potentially lose sales, the new law limits outside shippers to 12 cases a year per grapefriend.

This is definitely one time I can root for the Patriots. Even if it’s just off the field and in the vineyard.