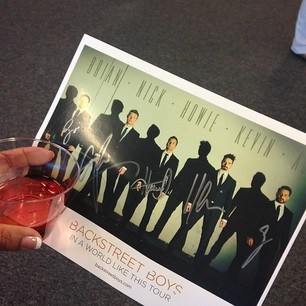 this is a pic from a fan who met them backstage and then had wine. good little grapefriend.

Boy bands are still kickin’ it on tour, although really they should now be called Man Bands. And, now that they are all over 21, that means they can legally drink. So why not make a wine?

The other night, the Backstreet Boys tweeted out: “If we were to wine and dine you, what would be your wine of choice?” It’s a perfectly fitting cheesy question (“wine and dine” ooooooooooookkkkkkkkkkkkk), and makes you wonder if they’re making their own wine.

The tweet came along with a poll asking people to vote for a varietal, and the replies on Twitter were full of calls for Moscato and White Zin. But there’s one clear choice: with five guys in the group, they should obviously make a Bordeaux-style blend (which is made with five grapes). In America, this is called a Meritage and there are plenty coming out of Napa where they’ve performed before.

Maybe they’ll revise their song to “I Want Wine That Way.” And also “Backstreet’s Back – with Wine!” And “I don’t care who you are, where you’re from, what you did, as long as you love wine.” I could go on all day, I used to book celebs in the teen market.

2 thoughts on “are the backstreet boys making a wine?”