Scandal wine recaps are back, thanks to our Gladiator Grapefriend Abby Gardner and the fact that wine made its reappearance on the show! Phew!

this is Liv, REALLY sad that her mom came and drank her wine

It’s been a long couple of weeks, gladiators and grapefriends. But at last, Scandal is back in the wine game where it belongs! While we’d like to assume that Liv has been drinking her trusty red grapes offscreen we haven’t actually SEEN her imbibe in a while. That all ended tonight.

First, let’s just get real for a second and admit that every time you try to figure out what the exact function of B613 is (other than serving as a reminder that Scott Foley has aged very nicely) you need a giant glass of vino. They protect the republic but are not under the control of the government. And they funded by every department but with the click of a button their phones get turned off? Okay. And Papa Pope’s long, dramatic speeches really do nothing to explain this better.
.
But I digress…back to our two (TWO!) wine moments of the night.
. 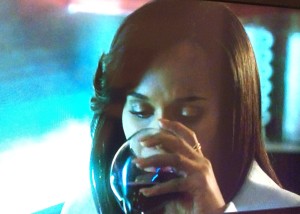 After already referring to herself as a fluffier in an impassioned speech to her increasingly temperamental (and that’s really saying something) President/boyfriend, Liv has to turn around later in the episode and sleep with Command/sometimes boyfriend Jake in order for Huck to download info from his phone or some such. (Again it’s B613 stuff and it really doesn’t make a lot of sense. But I’ll roll with it.) Obviously, Liv sneaks into his apartment and has already poured herself a giant glass before Jake wakes up and pulls a gun on her. Then they totally get down to business and it would appear that Liv got what she needed on MANY levels. By the end of the episode OPA has shut down B613 and unknowingly put Fitz in danger of being blown up by the Mona Lisa of Boom.
.
grapefriend’s wine recommendation: This was some steamy business, so you need a sexy, sultry red. A Bordeaux style blend that mixes velvety Merlot and studly Cab would do well to reflect Liv and Jake, no? (Also – my bigger wuestions is did she bring her own wine to Jake’s, or did she bust into his wine stash and just start popping bottles? Either move is so baller.)
. 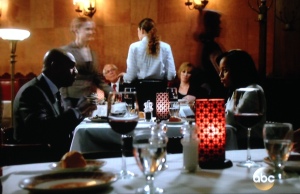 note the two full glasses on this empty table in front of the Popes. Does this resto just have red wine waiting for people when they sit down? AMAZING.

Olivia’s parents are the definition of dysfunction, but they do love their wine and for that alone we applaud them. Mama Pope (she who is housing the Mona Lisa of Boom in her hotel room) shows up for the Daddy/Daughter dinner and promptly states, “During my 22 years in prison, the thing I missed most was really good wine.” I bet you did! Maybe that’s why she chewed through her wrists in the beginning of the season (ew…remember that?) The lady just wanted a good vintage. After throwing around her scary terrorist threats, she is at least polite enough to leave the table by thanking her ex and her daughter for the wine.

grapefriend’s wine recommendation: Those parents are CRAY. You drink with these wolves, there’s one thing and one thing only that you need: backbone. You set yourself up with some heavy, inky Petite Sirah and grow some hair on your chest. I don’t even think decanting is necessary – keep the tannins, you’ll need all the grit you can get! But man, CHEERS to Mama Pope. That is a family of grapefriends, I love it!!! OK, back to Abby’s awesome recapping…
.
May I also just add that I’d like to give a toast this week to Abby, for throwing on a white coat to stand in for Liv at the White House and for always having a good zinger at the ready. Plus she’s a redhead named Abby, as am I, so… And also to Mellie for throwing one hell of a slap across Fitz’s face for taking away her boyfriend.
Until next week where somebody may or may not get blown up and I will need a lot of wine to get through the episode.
.
PS did everyone catch Liv drinking whiskey to celebrate their “win”? Interesting! 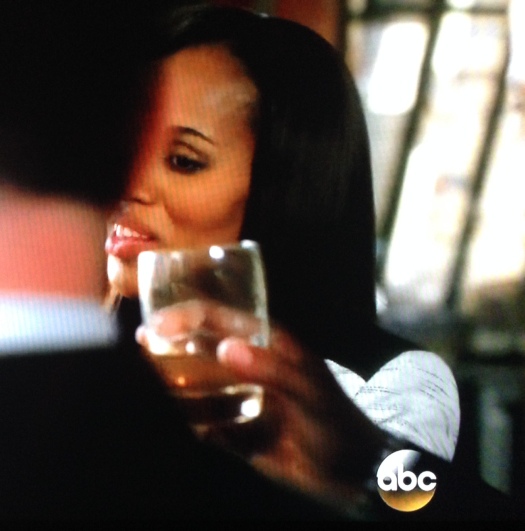 .
Follow along on Twitter @grapefriend and @abbygardner. She teaches me things about past seasons of Scandal, like how I’m not the only one who still hates Tony Goldwyn from his Ghost role.

One thought on “scandal wine recap: “Its been lovely, thanks for the wine!””