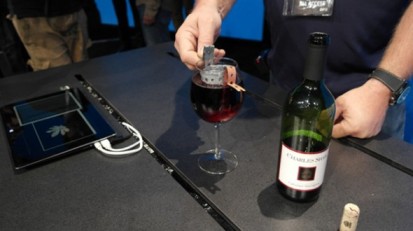 This actually happened: at the Intel Developer Forum (I’d never heard of it either) they used a glass of red wine to power a computer. Are you kidding me??? Wine is the best.

Apparently, the acetic acid in red wine acts as an electrolyte that produce a small current. I stole that straight from geek.com, I have no idea how it all works.

Why did Intel choose wine for this? Because they’re grapefriends! “In my group, we’re like kids in a candy store,” said Mike Bell, vice president and general manager of the New Devices group. Yeah, I’ll say. Except I’ll say “wine store” instead of “candy store” – but euphemize as much as you want, Mike…

I was also glad to see they used some good old two Buck Chuck and didn’t waste like a Chateaneuf du Pape on this experiment.

Anyway, I have over 200 bottles of wine in my apartment at any given time. If we ever lose power, I will be SET.