We’ve extensively covered all the ex football players and coaches who’ve gotten into the grape business many times on grapefriend. But now we’re getting their grapes on the field to find our 2013 champion!

position: coach for the Bears and the Saints

play: “The Coach” Cabernet Sauvignon. Ditka has a whole line of wines, each named after a phase of his career (others are “The Player,” “The Hall of Famer,” and “The Icon”).

analysis: A rookie Cab. At $16, it’s an easy drinker with simple blackberry flavors. If you dig around you can find a tiny bit of depth with some cocoa. 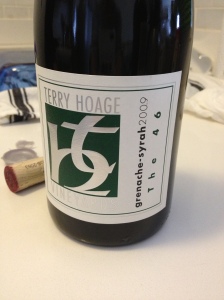 play: “The 46”. Hoage has a vineyard in Paso Robles and makes wines named after defensive plays like “The Pick” and “5 Blocks” and “The Hedge” – which also coincidentally have vineyard references!

analysis: The risk taker. Most football guys go into Cabernet, but Hoage plays with Rhone varietals like Rousanne, Grenache, and Syrah. This wine’s really delicious – very smooth black cherry and blackberry, with some good earthiness to it. $48

position: Quarterback for the Seahawks, backup QB for the Bears and the Lions

play: Mirror Napa Valley Cabernet. He has two cabernet vineyards in St. Helena that “mirror” each other, plus a Sav Blanc now too (see yesterday’s iview with Rick for more).

position: QB for the Patriots

analysis: QB1. Deep, earthy blackberry with some milk chocolate and a dash of sage. Smooth and well integrated tannins for a 2009. Good acid in back of palate so should be able to age. Not too weighty, nice body. $80

position: Wide Receiver for the Jets, Buccaneers, Cowboys and Panthers

O-line: 100% Cabernet from Oregon (most red coming out of OR is Pinot Noir)