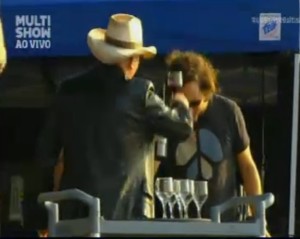 Lollapalooza has been rocking Brazil and Chile with bands like The Black Keys, Queens of the Stone Age (love), Puscifer, and Pearl Jam. Solid lineup, but let’s focus on the last two since they’re the best – because they’re grapefriends.

First, Puscifer is fronted by Maynard James Keenan who makes wine. His wineries, Caduceus and Merkin, are both in Arizona which is pretty cool since there’s not much wine coming out of there. Anyway, he was in Brazil and he was pouring wine out for people (including Eddie Vedder) on stage.

Then a few days later in Chile, Eddie’s pounding it on stage (maybe a little too much?), and proclaims: “El vino aquí es más rico que la chucha” which means “the wine here is as rich as…” – well, I’ll let you click here for the translation, we like to keep it clean here on grapefriend!

Too dark to see what he was actually drinking, but Chilean wines are really good values. Most people get the Cabs which I’m not super into, but I really like the spicy black Carmenere and the crisp grapefruity Sauvignon Blancs. Just had this good SB the other day, and it’s only $13.

The Beckhams were skiing at Whistler in Canada and this is what they drank. As we all do, right??? Sassicaia is a Super Tuscan Cab/Cab Franc blend and only about $270 retail. We all need to Après it like Beckham!