Obviously, wine got a better agent because it’s really getting a bigger role this season! Last night, it even entered the dialogue. 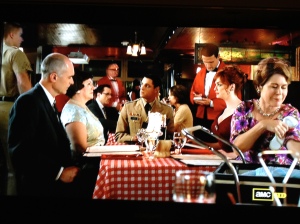 can’t see the fiasco too well here, but it’s right in the middle

When Joan was having dinner with Greg and the parents, there was one of those straw-covered bottles of wine on the table. This bottle’s called a fiasco – so aptly named since the wine it usually holds is Chianti which I’m not a fan of. Chianti is made from the Sangiovese grape, and the acid does go well with all that tomato-based pizza and pasta sauce. Now fiasco’s are often just used as decoration in cheesy Italian restaurants, and maybe also in the 60’s since in this scene there’s one on the table but they hadn’t even ordered their wine yet.

Joan ordered a gin fizz so she’s not really a grapefriend (yet) and her mother-in-law was too upset to drink wine, but it seemed that everyone else was down for some grapes. I also love how the waiter just points to a wine on the menu and Greg just says ok. Grapefriend tip: always ask a few questions when ordering.

So technically no one at the table was drinking the wine yet, although the people behind Joan were:

But I think we can count the 3 adults at Joan’s table as drinking wine, upping our seasonal count by the most per episode glasses so far.

I did, however, miss this Champagne moment last week: 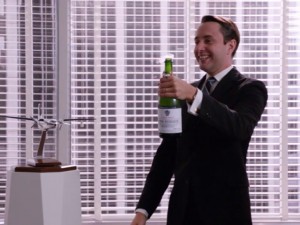 Pete’s Piper Hiedsieck would up the season’s count, but I’m going to stick to non-sparkling wine since there’s already been lots of Champagne popped in previous seasons.

2 thoughts on “mad men wine: what a fiasco!”

The cook off is on! Opened a medium bodied blend of Nebbiolo, Merlot, and Cab for the Caper anchovy tomato vs Alla Norma. Vote in the IG story!